Al-Shabaab terrorists interrogated students whether they were Christian or Muslim as they went door-to-door during this morning’s early morning massacre at a Kenyan university. At least 147 hostages have been killed in an attack, officials say. The group raided the Garissa University campus shortly after 5am local time, overwhelming guards and killing anyone suspected of being a Christian. At least 79 were injured while more than 587 students were rescued from the Garissa University College campus.

Eye-witness Collins Wetangula, the vice chairman of the student union, said he was preparing to take a shower when he heard gunshots coming from Tana dorm, which hosts both men and women, 150 meters (yards) away. The campus has six dormitories and at least 887 students, he said. 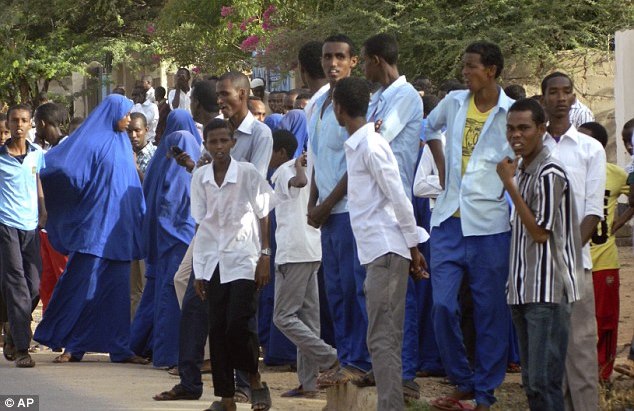 He said that when he heard the gunshots he locked himself and three roommates in their room. ‘All I could hear were footsteps and gunshots nobody was screaming because they thought this would lead the gunmen to know where they are. Mr Wetangula said he could hear the gunmen interrogating fellow students hiding inside their rooms about their religion. He said: ‘If you were a Christian you were shot on the spot. With each blast of the gun I thought I was going to die.’ The gunmen started to shoot rapidly and it was as if there was an exchange of fire, he said.


‘The next thing, we saw people in military uniform through the window of the back of our rooms who identified themselves as the Kenyan military.’ The soldiers took him and approximately 20 others to safety. As they were running, al-Shabaab snipers on top of a three-storey building attempted to gun them down.  He added: ‘We started running and bullets were whizzing past our heads and the soldiers told us to dive.’  The situation is still fluid as it’s considered a hostage situation.