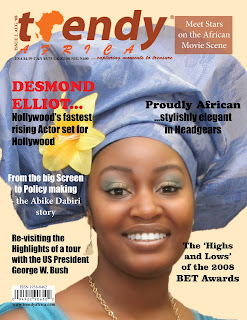 Someone once stated that believer’s have no need to panic or worry over economic and financial downturns. How? well believers belong to a supernatural economy that knows no bubble or depression. It’s a faith thing. Set your mind on worries on the ground and you’ll probably not get too far. Believe that you belong to a higher economy, then see what happens next.
Twice I had to change the production date of my second issue of Trendy Africa Magazine. The contents had to be updated which required extensive research. There were too many worries down here. Just too many and too complicated. But one day, a faith based gentleman walked up to me. During our discussion he mentioned; “hey Tosan, do you know that your economy is not of this earth but of high above? believe and see things change”.
I stood back and thought over this for a second. Apparently, the gentleman had come to my job to replace a tire on his vehicle. On inspection, I realized that he needed a set. I directed him to see a sales representative and after much consultation he opted for a set.
Today, my second issue is a reality. Reality with the right mind set. Those who know can attest to how much time I had to wait for $1 of support. Expectations, realizations, dreams and vision all seemed to fade with every passing hour but I always remembered the real economy I belonged too.
I also believe that those who believed that they had expectations to inspire me can still achieve it. There is still so much more to be done and guess what? the product would always be a physical reality of our input. All you have to do is just believe.
Previous Article Inspiration
Share This
Next Article The power of sixteen wheels

2 Replies on If you Believe