Hollywood’s favorite movie star is far too affable and charming to be a con artist, but in his latest role Will Smith plays just that. In ‘Focus” the new Warner Bros. film, Smith stars as a seasoned con artist who becomes romantically involved with another grifter. A romantic heist thriller, which jets from New York to New Orleans to one of South America’s most exquisite cities, Buenos Aires, it’s written and directed by Glenn Ficarra & John Requa (“Crazy, Stupid, Love”). For the two-time Academy Award nominee, having the duo in the director’s seat was part of his attraction to the project. 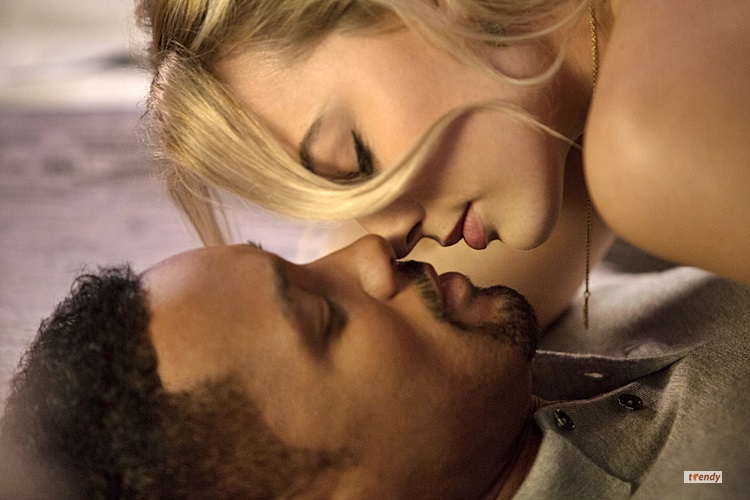 Will Smith and Margot Robbie get romantically involved in Focus. photo by Frank Masi

“I loved ‘Crazy, Stupid, Love’ and so when I heard that John and Glenn were working on another screenplay, I was excited to get in anywhere that I fit in. And when I read the screenplay, I thought it was a brilliant combination of comedy, drama, psychology and intrigue and I was inspired by the challenge of it.” 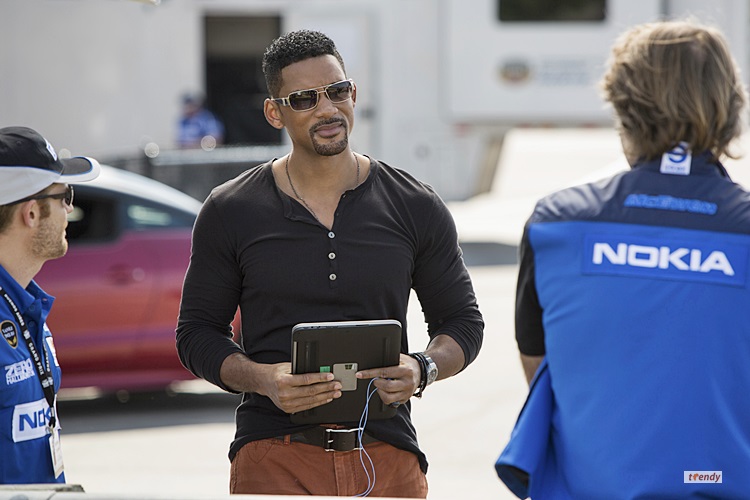 In the predictable but pleasant film, Smith plays Nicky (aka Mellow), a suave, stylishly clad gentleman who is clearly one of the best in his business.  A third-generation hustler, he runs a tight team of talented thieves — a motley crew of characters who can pick pocket just about anything from anyone without their knowledge. A well-oiled machine, they steal watches, jewels, electronics and anything they can off unsuspecting individuals.  One day he meets a fellow con artist called Jess (Margot Robbie). As he’s teaching her the tricks of the trade, she gets too close for comfort and he abruptly breaks it off. Three years later, the former flame—now an accomplished femme fatale—shows up in Buenos Aires in the middle of his million dollar con deal and throws his plans for a loop as he realizes that, not only has he never really gotten over her, but that she has clearly moved on. She is now romantically involved with the very man that he is getting into business with – the millionaire Spanish racecar team owner Rafael Garríga (Rodrigo Santoro). 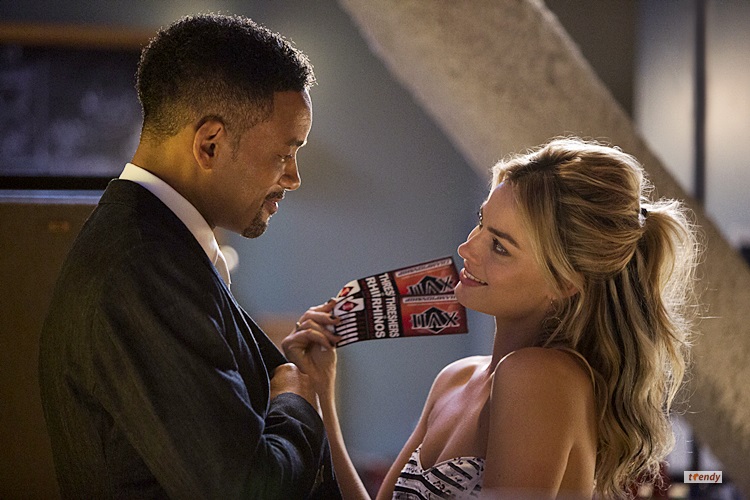 Will Smith as Nicky and Margot Robbie as Jess

“Nicky is one of the smartest, most dysfunctional people you’ll ever meet,” says Smith of his character. “He understands human nature and human behavior—there are very few people with that level of depth and comprehension. But he got his heart broken when he was little, and he has not yet learned to use his powers for good.” 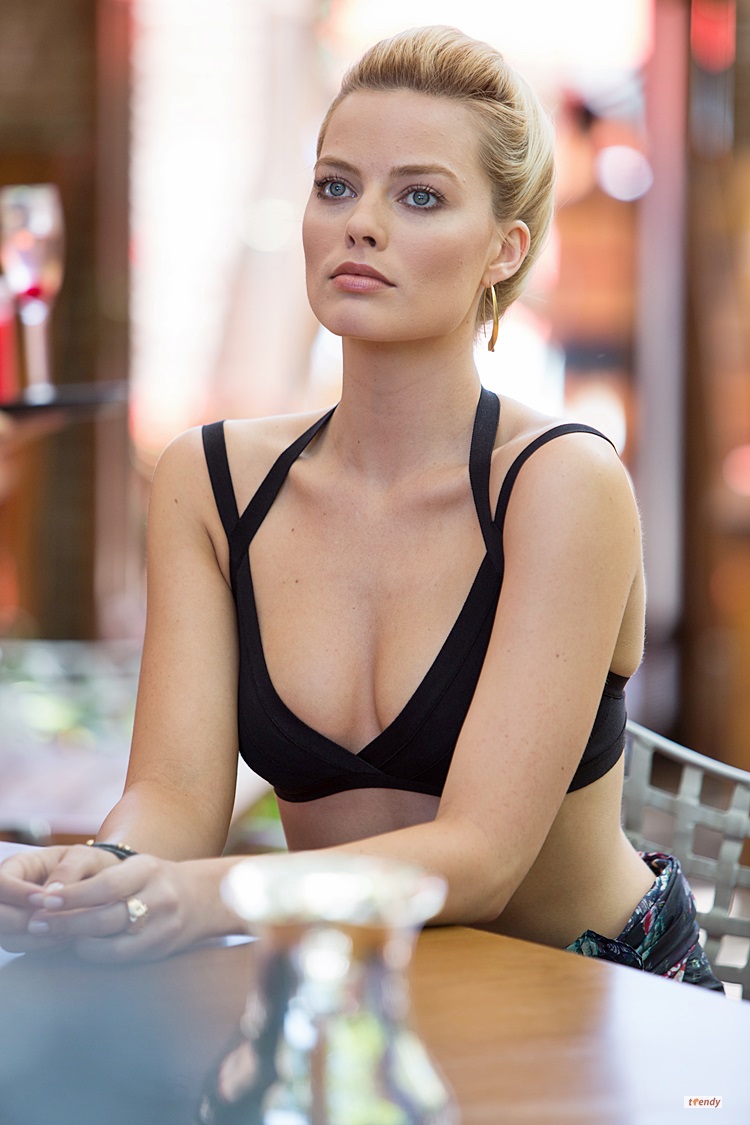 Smith sizzles as the leading man in his stylish suits and coiffed look. Margot Robbie (“The Wolf of Wall Street”) is also a delight to watch as the inexperienced, sort of a diamond-in-the-rough robber who is introduced to new things and there’s great chemistry between the two. 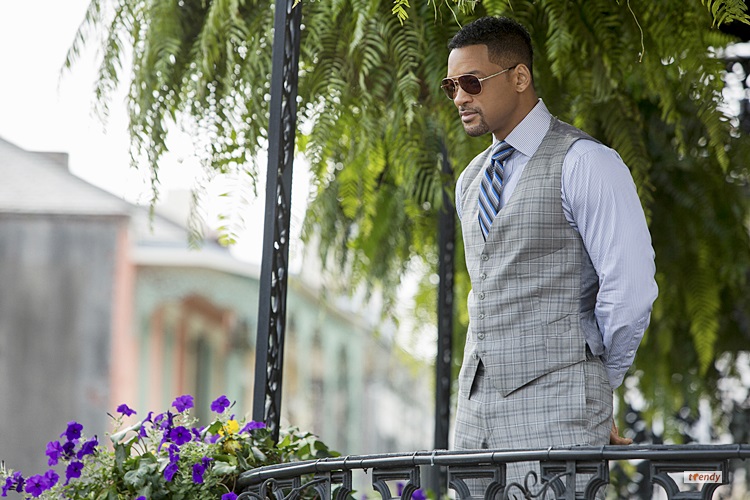 But alas, pretty people, jet-setting locales and a lively dialogue isn’t enough to keep ones focus on this thinly veiled heist caper. It’s just simply too predictable and implausible with certain inconsistent scenes and events which lack credibility. There’s enough to entertain but little to engage in this one. 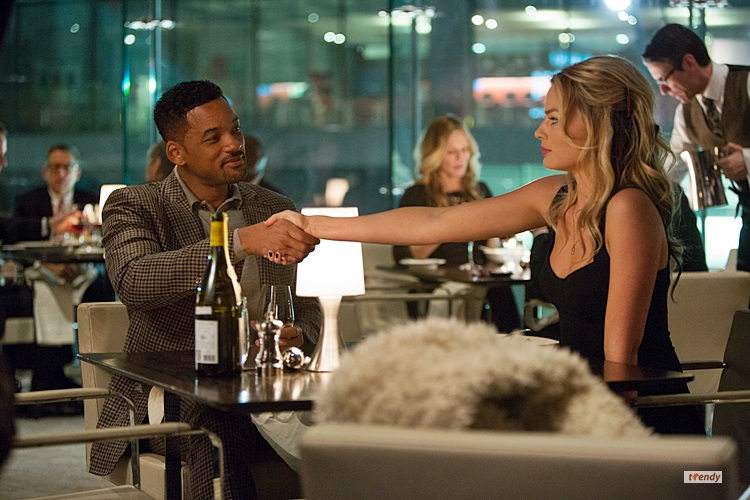 Smith, who received his first Oscar nomination for his portrayal of Muhammad Ali in Michael Mann’s “Ali,” and a second nomination for the true-life drama “The Pursuit of Happyness” is gearing up for a busy year. He is currently preparing for his role as Deadshot in David Ayer’s (“Fury”) “Suicide Squad,” a film based on the DC Comics’ team of super villains. He will soon be seen in Peter Landesman’s “Concussion” as forensic neuropathologist Dr. Bennett Omalu, who made the first discovery of football-related brain trauma in a pro player and brought awareness to the public. “Focus” releases in theaters Friday.