Although the conference hall at the headquarters of Surulere Local Government in Lagos where the maiden edition of Miss Virginity Pageant was held penultimate Friday was not packed full with the high and mighty usually associated with the more flamboyant female contests, the audience evinced reverence for the 43 virgin girls who attended the event.

However, when the event got to a climax, reverence gave way to excitement as 23 year-old Miss Titilayo Amudat Odekeye was announced as Miss Virginity 2009. The 43 girls had all been confirmed virgins the previous day by Dr. Ekemode- a Lagos-based consultant gynecologist.

Speaking to Vanguard Metro shortly after, Odekeye said:  “I am happy and I give God the glory that I emerged the winner of the crown”. The event was organized by Nigerian Virgin Girls, a subsidiary of Just For You Media.

Although she had no inkling that she would wear the crown when she entered for the contest, Odekeye prayed to God to give her victory.

Speaking on what she plans  to do during her reign she said:  “ What I intend to do during my reign as Miss Virginity is to go out there and encourage young girls to keep their virginity until they get married”.

She pledged that she would continue to work with any individual or group for the purpose of encouraging virginity among unmarried young girls in the country.

Miss Odekeye who emerged Miss Virginity among 25 other contestants that vied for the crown, is a final year Microbiology student at Olabisi Onabanjo University, Ago Iwoye (formerly known as Ogun State University).

She had sought for and received the support of her parents before she attended the programme that was organised by Nigerian Virgin Girls.

All the virgin girls agreed that it was not easy remaining chaste in various parts of the country where they lived.

For instance 20 year-old Isijola Adebola, a student of Lagos State Skills Acquisition Centre confirmed it had not been easy for her.

Said she: “I was determined to remain a virgin my marriage because I know my husband and his family would have a lot of respect for me when they know I remained a virgin before marriage”.

She said although she had some boyfriends in the past none of them lasted for more than six months mainly because she refused to succumb to their demands.

Said she: “I always told the few boyfriends I have had the point beyond which they could not go in our relationships. Some accepted but some did not”.

Speaking during the occasion, the founder of the organization, Princess Adunni Adediran disclosed that the programme was initiated to reduce immorality that has become the order of the day in the country.

According to her, “This is the second time we will be organizing this programme. The first time was in January 2008 when about 60 girls registered and were examined by Dr. Ekemode. At the end, 43 virgin girls were certified. 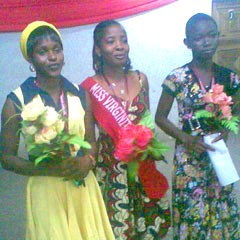 Adunni told Vanguard Metro she had conceived the programme for a long time but was unable to commence because of financial constraints.

Said she: “When I looked at the way young girls were being molested and dumped through having sexual intercourse, I said to myself this  must stop. This is because it is after de-flowering them, that they will be abandoned. It is after the man might have slept with a girl that he will see her bad legs or that her nose is too long. At times, these girls would have gone through series of abortions.”

She said, some of these girls end up suffering from   mental disorder or other deadly diseases including staphylococcus, gonorrhea and the dreadful HIV & AIDS.

While calling on parents and guardians to support the initiative, she said, it is an avenue where Nigerian girls will be taught the essence of keeping their virginity. This will also bring respect for the wife and her children’s children.

According to her,  it is also an avenue to reduce promiscuous acts and indecency amongst girls in Nigeria and to tell the men that the girls can still say no to immorality and wait till the night of their marriage because there is more joy in waiting for such a time.

When asked whether there is any religious restriction, he said the progranmme is open to all races including the daughter of a Pope, an Imam or an herbalist adding that her business is to ensure young girls keep their body till the night of marriage.

Her words: “We want people to begin to live normal lives where young girls would hate sex before marriage as children born by such women will know that their mothers were not promiscuous before getting married. Even the in-laws will respect such a lady and the community where they live will praise her.”

Speaking earlier at the occasion , Ambassador Segun Olusola praised the girls for keeping themselves chaste adding that it was not only Miss Virginity that was the winner, but all of them. He urged all of them to feel free to come to him for assistance at any time. Also present at the occasion was Dr. Yemisi Pitan, a clinical psychologist who gave the girls some tips on how to keep themselves safe.

“Don’t walk in a dark place; don’t visit a boy alone; don’t take any drink after you have left it for a while because you could be drugged”, she said.