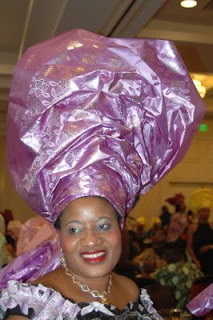 The worlds greatest athletic meet, the olympic games has come and gone for 2008 and I must say that China gave the world a treat. If you are human and did not catch a glimpse of any of the games, see a photograph or hear some news on radio, then you probably must have been on vacation to Jupiter.
Anyway, back to reality. I have scripted extracts from my forthcoming magazine and would love to share with you my continuation in the series of the exciting world of Headgears.
As a child, I had lots of thoughts about adult behaviors. I guess it was just part of growing up. One of those thoughts was sort of worrisome to me. Let me explain. My mother is from the rich cultural tribe of Itsekiri in the southern part of Nigeria and one of the attributes of the culture is flamboyant dress code of the women who most often adorn “george” materials and complimenting pieces on the head.

To make matters more complicated, we virtually lived most of our lives in the western part of Nigeria were the Yoruba tribe dominates. They also have a culture that is characterized by tasty and rich dress codes. They however combine silky lacy materials, jacquard, “aso oke” (high cloth) guinea brocade and until recently, Ankara. What really caught my attention back then was the contraption that had to be positioned and fit tightly on the head of women as a compliment to the exiting attires.

The precision, concentration, sweat the number of pins and clips all to have the thick material fit perfectly on ones head was exciting and puzzling to me. Understand the combination? Well, as I matured in age, it became clearer to me. This has led me to showcase the exciting world of Headgears as I prepare to call the contraption.

I must say for those who actually know the feel, it is not an easy task to get the material shaped into various appealing styles. Imaging a high grade linen material that is “Super Starched”; that’s the feel I am talking about. That is exactly how Headgears feel… to be continued