Single Ladies, an original TV series is set to premiere on Sunday 12 February 2017 at 20.00 CAT on DStv channel 168. The launch of Rok Studios 13th TV series further reinforces the production company’s offering to provide TV viewers original content content. Directed by actor-turned-director Desmond Elliot, the all-star series follows the lives of five single young women, Mara (Mercy Aigbe-Gentry), Tochi (Mary Njoku), Bidemi (Grace Amah) and Maimuna (Padita Agu), as they navigate the scary, exciting world of dating in Nigeria to find ‘Mr Right’. The search for such a man has so far been unsuccessful for these five young women from traditional Nigerian families. It is a race against time to snag one for keeps. We follow their friendships, the men they meet, their relationships, their break-ups, their highs and their lows; their successes and failures; their laughter and tears as they search for ‘The One’.

Speaking on the launch, Rok CEO Mary Njoku says: “After a long wait, Single Ladies is finally coming to DStv, in time for Valentine’s Day. For me, Single Ladies is very relatable. Whether you are male or female; single, in a relationship or married; old or young; you will be able to connect with the characters of Single Ladies.This series really explores the types of single women that exist in Nigeria; we have the single lady that is searching for a rich Mr. Right, the side-chick, the lady that is waiting on God for her man and more. Whatever you do, don’t miss out on Single Ladies.” Since its launch in 2013, Rok, headed up by actress and producer May Njoku has produced over 150 films and 13 original TV series, including blockbusters such as Husbands of Lagos, Desperate Housegirls, Losing Control and Cougars. In 2016, Rok went global, launching two Nollywood TV Channels, including Rok on Sky in the UK, as well as Rok on DSTV, across Africa. Rok viewers are the first across Africa to watch new and exclusive homegrown Rok content, such as Single Ladies, before it goes anywhere else. 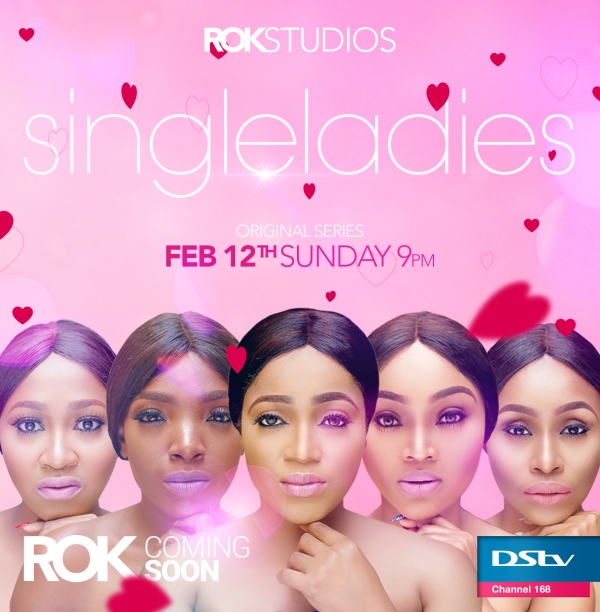 Rok Studios launched in 2013. Rok Studios is a leading African film and television studio and production house based in Lagos, Nigeria. They specialize in the creation of content in partnership with the industry’s foremost creative talent. Rok has developed, produced and financed film and TV series for distribution platforms globally. Rok owns one of the larger content libraries in Nigeria, with blockbuster films and series, as well as an Animation Studio called Rok Animations Studios.