Their new venture, FESTWORKS, will seek to provide consultation and services for film festivals of all sizes in the areas of festival operations, development, programming and communications. 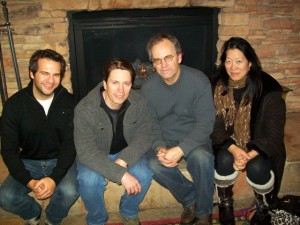 The fledgling company’s website states, ”As the film festival world grows more complex and mullti-dimensional, with greater demands placed on festivals to present exciting and relevant events to audiences while serving the interests of filmmakers and sponsors, there is a growing value for precise and informed services and solutions to the many needs that occur during the execution of a festival. FESTWORKS provides a one-stop service for festival operations, development, programming and communications.”

Kuo adds, “This collaboration allows each of us to have more creative freedom and is the best way for us to continue our commitment to artistic excellence and innovative film programming.”

Koehler added, “”We believe that the multi-faceted mission behind FESTWORKS reflects the current and ongoing changes in the film festival world, above all the need for exciting ways to devise, organize and execute festivals.”

“This partnership came together as a direct result of our experiences working together on this past edition of AFI FEST,” said Rogers, “And as the culmination of what each of us has identified as a need in the film festival community.”

Wildman concluded, “The four of us share a great passion for the art of film, for filmmakers and especially for the unique film viewing experience and interaction with those filmmakers that film festivals offer the public. It’s our hope that through FESTWORKS, we can help enhance the way things are done that will benefit both film maker and filmgoer and improve a way of seeing films that we truly love.”

Kuo, AFI FEST’s Artistic Director for the last three years, was recently named as Co-Executive Director of the Sante Fe Film Festival with Michael Hare and brings a wealth of experience in leading film festivals as well as film production. The architect of AFI’s successful “free festival” in 2009, Kuo is widely credited with the critical turnaround of AFI FEST.  In December 2009, the International Film Festival Summit honored her with its prestigious IFFS Excellence Award. Kuo has worked for Mill Valley, San Francisco and Santa Barbara film festivals, as well as renowned directors such as Michael Mann, Paul Schrader and Martin Scorsese. She is an occasional contributor to Movie City News.