WASHINGTON – In this week’s Democratic Radio Address, President-elect Barack Obama discussed a report released by the Obama-Biden Transition Team analyzing the number and types of jobs an American Recovery and Reinvestment Plan will create.

President-elect Obama directed his nominee for Chair of the Council of Economic Advisers, Dr. Christina Romer, and the Vice President-elect’s Chief Economic Adviser, Dr. Jared Bernstein, to conduct the report so that the American people can see exactly what this plan will mean for their families, their communities, and our economy. 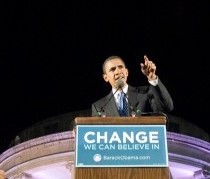 We start this New Year in the midst of an economic crisis unlike any we have seen in our lifetime.  We learned yesterday that in the past month alone, we lost more than half a million jobs – a total of nearly 2.6 million in the year 2008.  Another 3.4 million Americans who want and need full-time work have had to settle for part-time jobs.  And families across America are feeling the pinch as they watch debts mount, bills pile up and savings disappear.

These numbers are a stark reminder that we simply cannot continue on our current path.  If nothing is done, economists from across the spectrum tell us that this recession could linger for years and the unemployment rate could reach double digits – and they warn that our nation could lose the competitive edge that has served as a foundation for our strength and standing in the world.

It’s not too late to change course – but only if we take immediate and dramatic action.  Our first job is to put people back to work and get our economy working again.  This is an extraordinary challenge, which is why I’ve taken the extraordinary step of working – even before I take office – with my economic team and leaders of both parties on an American Recovery and Reinvestment Plan that will call for major investments to revive our economy, create jobs, and lay a solid foundation for future growth.

I asked my nominee for Chair of the Council of Economic Advisers, Dr. Christina Romer, and the Vice President-Elect’s Chief Economic Adviser, Dr. Jared Bernstein, to conduct a rigorous analysis of this plan and come up with projections of how many jobs it will create – and what kind of jobs they will be.  Today, I am releasing a report of their findings so that the American people can see exactly what this plan will mean for their families, their communities, and our economy.

The report confirms that our plan will likely save or create three to four million jobs.  90 percent of these jobs will be created in the private sector – the remaining 10 percent are mainly public sector jobs we save, like the teachers, police officers, firefighters and others who provide vital services in our communities.

The jobs we create will be in businesses large and small across a wide range of industries.  And they’ll be the kind of jobs that don’t just put people to work in the short term, but position our economy to lead the world in the long-term.

We’ll create nearly half a million jobs by investing in clean energy – by committing to double the production of alternative energy in the next three years, and by modernizing more than 75% of federal buildings and improving the energy efficiency of two million American homes.  These made-in-America jobs building solar panels and wind turbines, developing fuel-efficient cars and new energy technologies pay well, and they can’t be outsourced.

We’ll put nearly 400,000 people to work by repairing our infrastructure – our crumbling roads, bridges and schools.  And we’ll build the new infrastructure we need to succeed in this new century, investing in science and technology, and laying down miles of new broadband lines so that businesses across our nation can compete with their counterparts around the world.

Finally, we won’t just create jobs, we’ll also provide help for those who’ve lost theirs, and for states and families who’ve been hardest-hit by this recession.  That means bi-partisan extensions of unemployment insurance and health care coverage; a $1,000 tax cut for 95 percent of working families; and assistance to help states avoid harmful budget cuts in essential services like police, fire, education and health care.

Now, given the magnitude of the challenges we face, none of this will come easy.  Recovery won’t happen overnight, and it’s likely that things will get worse before they get better.

But we have come through moments like this before.  We are the nation that has faced down war, depression and fear itself – each time, refusing to yield; each time, refusing to accept a lesser fate.  That is the spirit that has always sustained us – that belief that our destiny is not written for us, but by us; that our success is not a matter of chance, but of our own courage and determination.  Our resources may be finite, but our will is infinite.  And I am confident that if we come together and summon that great American spirit once again, we will meet the challenges of our time and write the next great chapter in our American story.

The report found that an American Recovery and Reinvestment plan will:

– Save or create three to four million jobs.

– More than 90 percent of the jobs created would be in the private sector.

– Most of the remainder would be professionals on the front lines serving the public whose jobs are saved from state and local budget cuts.

– Create nearly half a million jobs by investing in clean energy.

– Put nearly 400,000 people to work by repairing our infrastructure.