Washington DC – President Elect Obama will today present view on the state of the economy. Excerts of the speech are as follows;

“I don’t believe it’s too late to change course, but it will be if we don’t take dramatic action as soon as possible.  If nothing is done, this recession could linger for years.  The unemployment rate could reach double digits.  Our economy could fall $1 trillion short of its full capacity, which translates into more than $12,000 in lost income for a family of four.  We could lose a generation of potential and promise, as more young Americans are forced to forgo dreams of college or the chance to train for the jobs of the future.  And our nation could lose the competitive edge that has served as a foundation for our strength and standing in the world”.

In short, a bad situation could become dramatically worse.

…There is no doubt that the cost of this plan will be considerable.  It will certainly add to the budget deficit in the short-term.  But equally certain are the consequences of doing too little or nothing at all, for that will lead to an even greater deficit of jobs, incomes, and confidence in our economy.  It is true that we cannot depend on government alone to create jobs or long-term growth, but at this particular moment, only government can provide the short-term boost necessary to lift us from a recession this deep and severe.  Only government can break the vicious cycles that are crippling our economy – where a lack of spending leads to lost jobs which leads to even less spending; where an inability to lend and borrow stops growth and leads to even less credit.

That work begins with this plan – a plan I am confident will save or create at least three million jobs over the next few years.  It is not just another public works program.  It’s a plan that recognizes both the paradox and the promise of this moment – the fact that there are millions of Americans trying to find work, even as, all around the country, there is so much work to be done.

That’s why we’ll invest in priorities like energy and education; health care and a new infrastructure that are necessary to keep us strong and competitive in the 21st century.  That’s why the overwhelming majority of the jobs created will be in the private sector, while our plan will save the public sector jobs of teachers, cops, firefighters and others who provide vital services. 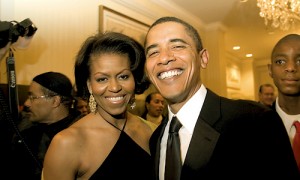 In keeping with President-elect Obama’s pledge to run the most open and transparent transition in history, the Obama-Biden Transition Project has voluntarily chosen to release the names of its donors on a monthly basis. Typically, transition donors are released after the transition period is complete.  As of December 15, 2008, a total of $3,803,222.48 had been raised from 53,853 donors. The average donation is $70.62 per donor.

Earlier this morning, President-elect Barack Obama and Mrs. Michelle Obama helped their two daughters, Malia (10) and Sasha (7), get ready for their first day of school. 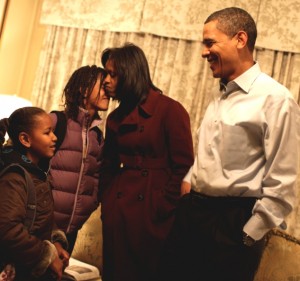 Previous Article Ramsey Nouah, others attend Premiere of Nollywood Movies in Maryland
Share This
Next Article Oyiza Reports on Child Abuse in Africa