“I like making fun of things and have a dark sense of humor,” says Marlon Wayans, who along with his brothers Keenen Ivory, Damon and Shawn have built a reputation on making outrageous lampoons of popular films. “I look at dark things and try to find what’s funny about it.  Maybe that’s my nervous reaction in life because I don’t like to be sad or scared and would rather be happy.” Written and produced by Marlon Wayans and Rick Alvarez and directed by Michael Tiddes, “A Haunted House 2” takes place a year after the first film. Malcolm (Marlon Wayans) has moved on and has left his girlfriend Kisha (Essence Atkins) who we saw in the first film for a ‘white chick’ called Megan (Jaime Pressly). When we first meet him, he’s moving into a new home with Megan and her two kids played by Ashley Rickards and Steele Stebbins and it isn’t long before he finds himself in a perfect storm of paranormal activity and is once again plagued by bizarre occurrences in the home. 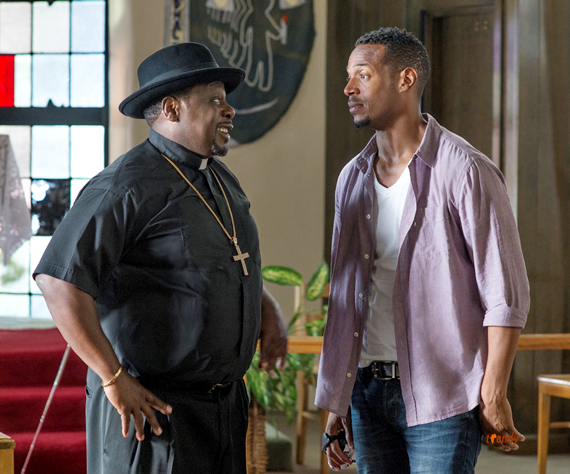 A slight budget boost this second time around “gave us the ability to bring in a bigger cast and fresh points of view,” says Alvarez of the sequel. “We have all kinds of different people in this movie and that makes it a bigger, richer experience.” In addition to Wayans, returning from the first film are Essence Atkins, Dave Sheridan, Cedric the Entertainer and Affion Crockett who reprises his role as Malcolm’s comical cousin Ray-Ray. Like its predecessor, there’s a string of crude gags, and as usual Marlon finds any excuse to show various male organs and bodily functions. There is a sex scene with the creepy doll from “The Conjuring” which they discover in their new home that plays ten minutes too long and a wild exaggeration of stereotypical behavior. Black men dating white women jokes, black people loving chicken jokes and every Latino stereotype you can think of. No race or stereotype is safe in this movie, but it’s all in good humor for that’s a Wayans specialty. 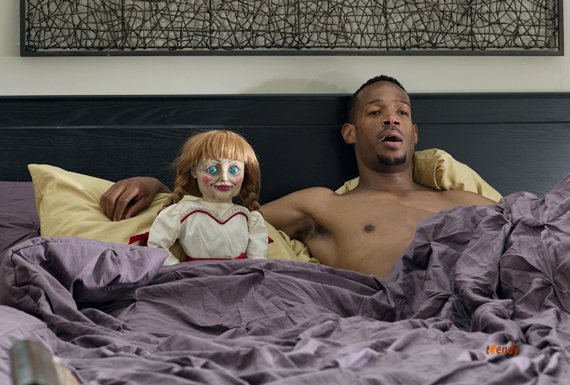 Abigail and Marlon Wayans as Malcolm Photo Credit- Will McGarry

“We Wayans are equal opportunity offenders,” Marlon continues, “It’s never meant to hurt feelings and it’s always meant to bring light and laughs. They are things we knew would make people uncomfortable that we pulled out. We had a run that Cedric did about Catholic priests but it gets uncomfortable and even though it’s funny to us, we cut it down. Comedy is subjective, but if it’s offensive to the majority of the people I will take it out because I want the majority of the laughs.” To get your money’s worth, you need to be familiar with recently released horror flicks such as “The Conjuring,”  “Sinister,” “Possession” and “Insidious” as it lifts scenes from these movies, adds a joke or two, and crafts a whole new movie from them.

At times the film is uproariously funny and the biggest laughs are the scenes involving Cedric the Entertainer who briefly returns as Father Williams, the dubious priest who became a man of the cloth while serving a 20-year jail sentence. Like all spoofs, if you have seen the movies they are spoofing you will get the jokes but even if you haven’t, you will still find yourself laughing. Ultimately, Marlon just wants his audience to have a good time. “Come to the movie. I hope you feel better when you leave. I hope you laughed; I hope you got your 14 dollars worth of laughs.” With audacious punch lines, over-the-top gags and unapologetic humor, it only seeks mindless fun and entertainment, and it succeeds at that level.  “I just want people to go be a kid again,” he adds. “Go find their smile for at least an hour and a half and enjoy themselves.”