Kenya’s ‘Nameless’ won in the Best Male Artist category and the Listener’s Choice category, which recognizes the biggest radio hits of the year. His Nigerian counterpart, ‘M.I.’ got the Best New Act and Best Hip Hop Awards. 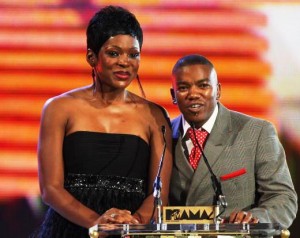 Kenya kept the Best Female award under lock again this year via ‘Amani’, who followed the footsteps of her fellow Kenyan, Wahu, who won the first award for that category during MAMA 2008 in Nigeria.

In a similar manner, Nigeria’s D’Banj clinched the Artist of the Year, again. A win that has consolidated his relevance after pulling a triple win at the maiden event in 2008

The 2009 MAMA was anchored by Wyclef Jean who spoke about his Haitian family’s roots in Benin, West Africa during the press conference. Unlike the 2008 MAMAs, which featured the Game, Flo Rida and Kelly Rowland, Wyclef Jean and Senegalese-born U.S. star Akon were the only international performers and both made a point of emphasising their connections to the continent on-stage.

Artist of The Year: D’Banj (Nigeria)