LOS ANGELES (AP) — Inspectors at Los Angeles International Airport seized 67 live giant African snails that are a popular delicacy across West Africa. The snails arrived from Nigeria and were being sent to a person in San Dimas, said Lee Harty, a spokeswoman for the U.S. Customs and Border protection.

The snails were confiscated July 1 and a sample was sent the next day to a federal mollusk specialist in Washington, D.C., who identified them as a prohibited species, Harty said. The mollusks are among the largest land snails in the world and can grow to be up to 8 inches long. They are native to Africa and can live for up to 10 years. 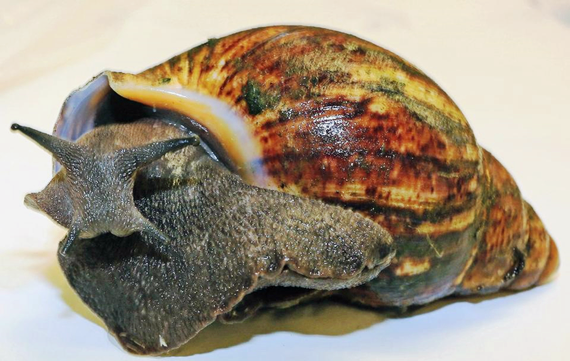 The U.S. Department of Agriculture incinerated the snails after they were inspected, Harty said. The animals are prohibited in the U.S. because they can carry parasites that are harmful to humans, including one that can lead to meningitis. The snails are also agricultural pests, said Maveeda Mirza, the CBP program manager for agriculture.

“These snails are seriously harmful to local plants because they will eat any kind of crop they can get to,” Mirza said. The person the snails were destined for is not expected to face any penalties, Mirza said. She said authorities are investigating why a single person would want so many snails. “We’re investigating what happened, but it doesn’t seem like there was smuggling involved. When someone doesn’t know a commodity is prohibited under USDA regulations there is usually no punishment,” she said.

Although the agency has found one or two snails that may have accidentally gotten into a traveler’s luggage in Los Angeles, this is the first time that they have confiscated the snails in such a large quantity, Mirza said.