Finding actors to play characters based on real people is never an easy fete, but director Mira Nair’s first choice for the role of Robert Katende in Disney’s “Queen of Katwe” was David Oyelowo. “David is a chameleon,” says Nair. “He allows himself to disappear into whichever role he is playing so that you don’t even recognize him.”

The true story of a young girl from rural Uganda whose world rapidly changes when she is introduced to the game of chess by Robert Katende (Oyelowo), a soccer player turned missionary, it’s a role the British, Nigerian-born actor says he couldn’t turn down.

“I’m frustrated by how little we see of the real face of Africa in Western movies, how we’re always confronted with the dark side – dictators, genocide, disease – when I know this continent is filled with tremendous stories of hope, triumph, love and joy,” he explains. “This was one of those stories filmed in Africa, played by Africans and filmed by a woman who has lived on the continent for nearly 30 years, so I knew we were in good hands.”

Filmed in Katwe and Kibuli in Kampala, Uganda, as well as in Johannesburg, South Africa, employing local crews and extras in both countries, “Queen of Katwe” also stars Lupita Nyong’o, Madina Nalwanga and Martin Kabanza.

The film follows 9-year-old Phiona Mutesi (Nalwanga) who spends her days helping her widowed mother (Nyong’o) sell vegetables on the streets of Katwe, one of the most poverty-stricken slums in Kampala.  Life changes for Phiona when she meets Robert Katende who runs a chess program for Katwe children. Mesmerized by the game, she quickly catches on to its meticulous rules and with Katende’s mentorship rapidly advances through the ranks of chess tournaments, eventually becoming Uganda’s junior champion.

“It’s an important story as mentorship is something that is so necessitous for development anywhere and everywhere,” continues Oyelowo. “You see the impossible made possible through family mentorship, encouragement hard work and belief. These are things we can aspire to and in this story you will see how beautifully they come to fruition.” 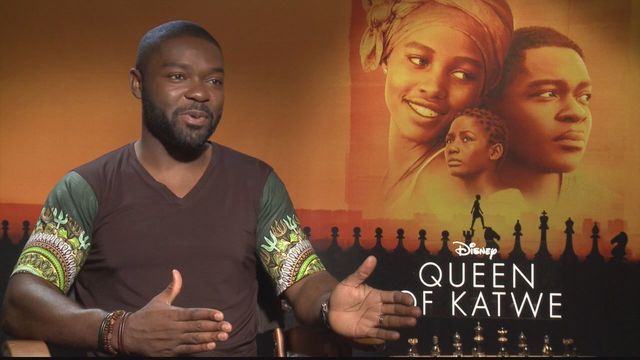