Ghana reached the semi-finals of the Africa Cup of Nations after Mubarak Wakaso scored a controversial penalty and a breakaway goal. Ghana won a penalty-kick when Asamoah Gyan fell after a Carlitos shoulder barge and Wakaso. Cape Verde responded well and Ghana goalkeeper Fatau Dauda made superb saves from Platini, Djaniny and Heldon. 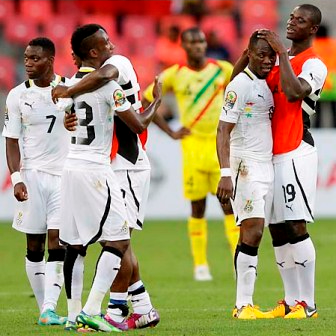 But Wakaso raced clear with the Cape Verde keeper stranded to seal the win.It was a harsh ending for Cape Verde, who came so close to an equalizer that would have been deserved on balance of play in the second half.

That they were undone by a dubious penalty decision and a last-minute goal when they had thrown everyone forward will be a bitter memory to reflect on when they look back at their first Nations Cup finals.

The Blue Sharks shaded a cagey first half as both sides looked more afraid to make a mistake than be prepared to try to make something happen.