Los Angeles – The 4th edition of the Ankara Festival Los Angeles 2013, ‘AFLA 13’, held at The Avalon in Hollywood drew a crowd of on fashion enthusiasts both from California and across the country to experience one of the largest and most diverse African Fashion and Music events on the west coast. AFLA 13 was a celebration of fashion designers and people who embraced the use of traditional African material for contemporary fashion. It was an “Original Africa” experience. 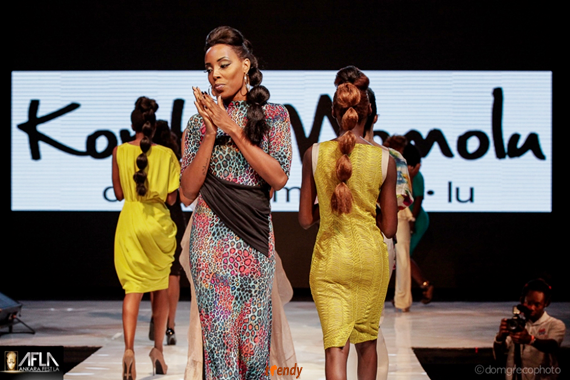 The African fashion trends at this edition of Ankara Festival in Los Angeles was far more than dazzling. The high fashion event held at The Avalon in Hollywood showcased some of Africa’s hottest designers and popular music artists. The look of this year’s show in Hollywood brought a new meaning to the word “Revolutionary”.

MUD Make-up Artists were on hand to polish off the look with a dewy foundation, metallic smoky eyes, and a nude lip. The bold contoured faces of the models as they strut down the runway were topped off with straight, elegant styles. The Paul Mitchell School of Sherman Oaks were present providing all the required hairstyling and hair products. The designers had the models rip the runway in their most creative Ankara designs, and finally the crowd was moved by the “Giving Campaign” from TOMS, partners to AFLA 13, through their #OneforOne & #BeShady campaign, and they further surprised the crowd where models strutted the runway with a range of TOMS shoes and TOMS glasses.

The hosts for the event were the superb duo of Duain Richmond (FELA! On Broadway, Sierra Leone) and Yvonne Orji (Comedian, Nigeria) who kept the crowd engaged from the beginning to the every end of the show. They were dressed and accessorized by the all of the designers on the show. A catch-phrase was coined by Yvonne before the intermission which left the crowd in fits of laughter, “I don’t care if Jay-Z is wearing Tom Ford, I’m wearing my African Print!”

AFLA 13’s event ambassadors were Lara Okunubi (Philanthropist), Monalisa Okojie (Celebrity Jeweler), and Sammy Rotibi (Actor). At the end of the show, a final surprise was announced: the 2014 Ankara Festival Los Angeles Banner was revealed! The event is expected to hold on 7th September 2014.