The Chukwu Octuplets (born in December 1998 in Houston, Texas) to Nkem Chukwu and Iyke Louis were the first set of octuplets born in the United States. The smallest of the octuplets, Odera, died a week after birth.

Within a month, all remaining 7 babies were breathing independently without any support from oxygen. A few years ago The Houston Chronicle did an update on the family and reported that the 7 babies were thriving and growing like normal children.

In 2002, Nkem Chukwu delivered a daughter named Divine Favour, this time without the help of medication. She is called “Favour” as Chukwu believed that God did her a favor by giving her back the daughter she lost after the octuplets’ birth. Favour is usually seen in public dressed like her siblings forming an 8-member octuplet brood. 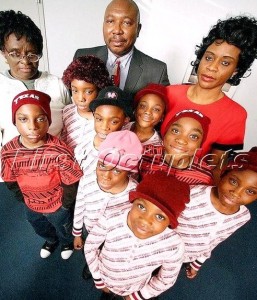