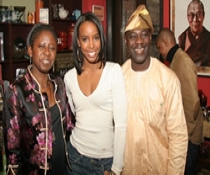 She is considered as one of the youngest most successful Diva’s of all time. She is seen on the packages of Softsheen.Carson dark and Lovely products world wide. At 25, Kelly Rowland despite her humongous fame and celebrity status was all down to earth as she played compare at the recently held L’Oreal event held in Manhattan New York city.

Her dexterity and charm appealed to all specially invited guests as they applauded to her every remark at the event. Kelly Rowland, the official face of SoftSheen.Carson whose involvement with the world acclaimed group Destiny’s Child is set to release her solo effort in July 06. She is acclaimed to be a professional performer as well as professional dancer whose popularity is worldwide. Her fan base cuts across various continents of the world.

Kelly spotted a lovely green trouser suit as she interacted with personalities in the beauty care world. The SoftSheen Carson event at the Lotus center showcased top hairstylists who demonstrated the wonderful effects of the products.

Top models were also on hand to showcase the virtual view of the real edge of L’Oreal products. Supermodel, Alek Wex was also on hand to attribute the essence of beauty with SoftSheen.Carson products.

The L’Oreal group also organized a competition that enabled two lucky fans of Kelly Rowland meet her personally. The winners were flown in from Paris and U.K. It was tea time later on for Kelly Rowland at the Salon and Tea Emporium were over 400 varieties of tea prom all over the world was showcased.

Kelly proposed a toast for the safe trip for all those who had come from long distances to attend the event. In an exclusive session, Kelly Rowland explained the importance of relaxation as it applies to anyone with a schedule like hers.

She just acquired a sea side home in Miami were she explained her love for beach relaxations. As for water sports it’s not just her game. Kelly Rowland also took time to speak to Miss Ghana, Sophia who was unable to make the trip. When asked about what she felt about SoftSheen.Carson, she said she would not endorse a product she does not believe in.

She believes that Softsheen.Carson products are good at putting moisture back in the hair while keeping the hair looking healthy. She also stated that the products had been in her family for years on all the beauty cabinets. Her first relaxer as a child was a dark and lovely relaxer.

While speaking to the winner from Paris, Kelly recalled a visit to the La Fayette shopping center with other members of Destiny Child. She remembered how a crowd of fans kept on following them all over the mall. “It was almost like a mob”. At the Sony Recording Studio, we were privileged to listen to about four tracks from her forth coming CD. On a last note, this writer happens to share the same zodiac sign with the Diva, we are Aquarians.