He has solidified himself as a global box-office success with film revenues grossing in excess of $2 billion worldwide and he shows no signs of slowing down. In his latest action thriller “San Andreas” Dwayne Johnson plays a pilot in search of his daughter after catastrophic earthquake strikes California. Johnson’s character Ray is a doting father and a search and rescue helicopter pilot on the verge of a divorce.  He rescues a girl stuck in her car wedged between two mountains and saves his chopper unit in the first couple of scenes. When an earthquake slams Los Angeles, he’s back in heroic mode as soon as he discovers his soon-to-be-ex-wife, Emma (Carla Gugino) is stuck on the rooftop of a swanky L.A. eatery. Once reunited, they set off to find their only daughter, Blake, played by Alexandra Daddario, in the aftermath of a second quake 400 miles away in San Francisco after she’s ditched by her mother’s boyfriend Daniel (Ioan Gruffudd). 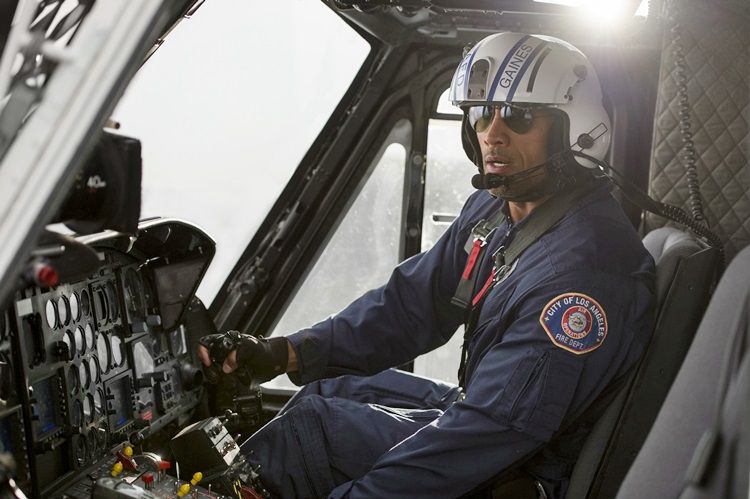 “People everywhere can relate to family, and how far we’re willing to go to protect the people we care about,” says Johnson “There’s nothing with wings or wheels that I do not operate in this movie, in my search for my daughter, and I even get to pilot a boat.” The film follows their treacherous journey, through the avalanche of debris as it tries to imagine the largest magnitude earthquake in recorded history (a 9.6). It’s a quake Caltech seismologist Lawrence Hayes (Paul Giamatti) predicted, but of course, no one listened (they never do). Lawrence believes that there is worse to come and manages to warn everyone when he hacks into a media network but the warning comes much too late as sheer chaos overcomes the west coast.

Director Brad Peyton (“Journey 2: The Mysterious Island”) follows a similar recipe that paid off lucratively in disaster movies “Independence Day,” “2012” and “The Day After Tomorrow.”  There’s a large dose of destruction, a sprinkling of character development and ounces of scenes involving our heroes narrowly avoiding death – numerous times. “Brad really takes pride in moving the needle,” Johnson attests. “He came to the set every day at full-tilt, looking for new ways to immerse the audience, emotionally and visually.”

With a staggering series of visual effects pieces “San Andreas” has great visuals. Roads buckle, bridges snap, fires erupt across multiple cityscapes and buildings fall, smashing into other buildings on their way down like goliath dominoes.  The most impressive being a 15-story tsunami – a virtual wall of water which comes crashing into San Francisco. As the events unfold and one extreme moment after another careens off the screen, you feel like you are living through these events with the characters. Speed, drama, humor is all inclusive but a weak dialogue and scenarios weigh it down. Still, it’s good popcorn cinema and is a decent summer fare that will earn a profit. Will it make the top ten list of best disaster movies? No. Does it entertain? Yes.

Previous Article Is the much awaited Change here?
Share This
Next Article FD Foundation: Financing Education for Orphans, Widows and Children