LOS ANGELES – Pettite, polite and exceedingly cute, Kwesi Boakye is Hollywood’s rising star. Already a veteran actor with an ever growing resume and roles in several features including Tyler Perry’s upcoming flick “I Can Do Bad All By Myself”, he began his career in television commercials at 10 months old staring in a video for pre-school kids called “Tots on Tape”.

A modeling gig in the worldwide Baby Gap campaign followed and it wasn’t long before he snagged his first casting role on the medical deama “Strong Mediine”. 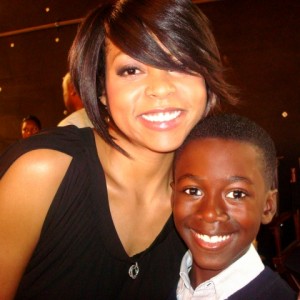 Since then, he has appeared in a string of prominent television shows such as “Boston Legal”, “South Park”, “Daybreak” with Taye Diggs and the daytime soap opera “Days of our Lives”.

Kwesi can be heard as a series regular on the new cartoon network animated series “Gumball” voicing the character role of Darwin. He also voiced Andrew on the animated series “Special Agent Oso” although his most notable voice over role was in the Oscar winning flick, “Happy Feet”.

“I enjoy acting because I meet a lot of people and get to travel to different places, which is really fun,” says Kwesi whose upcoming flick “I Can Do Bad All By Myself,” stars Academy Award Nominee Taraji Henson and Grammy Winner Mary J. Blige.

“In the movie I play a character called Manny who is a very tough kid that likes to fight a lot and is a little rough around the edges as he had to grow up pretty fast”.

Despite his high profile in Hollywood, Kwesiwho cites Will Smith as his favorite actor still attends a regular school in Los Angeles and when he isn’t working, has a fair regular life. He is a gifted student who loves reading, playing sports and taking hip-hop dance lessons. “My Favorite sport is soccer and I enjoy it because it involves a lot of exercise and it’s a very fun sport to play because you get to run up and down.”

With several more projects in the pipeline including a part in the upcoming TNT series “Men of a Certain age” with Ray Romano, this 10 year old Ghanaian native has officially sealed his spot in Hollywood.

Samantha Ofole Prince Contributes from Hollywood and can be reached at ofole@msn.com