The Nigerian entertainment industry has thrown a big challenge to President Goodluck Jonathan at a huge press conference held in Lagos on Monday, June 7, 2010 at the Jade Garden Chinese Restaurant in GRA Ikeja The Nigerian Entertainment Industry Alliance is the new all embracing organ aimed at providing a badly needed common voice on the important issues that affect the entire entertainment sector in Nigeria and properly positioning the industry within the nation’s political and economic spheres.

The entertainment industry stakeholders boldly stated: “we hereby challenge President Jonathan to fully engage the Alliance and the entertainment industry in a historic mobilization so that the enormous ingenuity, talent, industry and skills of the Nigerian people are unleashed and in our life time, we can show the world that a black nation can be truly great”

In an emotion laden address read on behalf of the alliance by Mr. Patrick Doyle, the new organ proclaimed as follows: – “A few days after the celebration of Nigeria’s Democracy Day and a few months to the celebration of the 50th anniversary of Nigeria’s independence, we, the stakeholders across the Nigerian entertainment industry, having come to the decision that the present state of the industry is not acceptable to us, have come together to announce the birth of the. The Nigerian Entertainment Industry Alliance

“We wish to make it clear that in forming the Alliance, we are not interested in the scrambles and squabbles over privileges and positions which have hurt the entertainment industry badly. We believe that the time has come for everyone at every level in the industry to focus on service rather than pecks. We also wish to make it clear that except in cases where personalities cannot be separated from the issues, the Alliance wishes to avoid personalities and will concentrate solely on policy issues.

At the conference, the Alliance observed that the Nigerian entertainment industry continues to provide the nation with the most authentic means to properly channel the boundless talents, energy and skills of hundreds of thousands of young Nigerians whom the nation risks turning into enemies of the society as a result of the lack of any employment opportunity or any social support system. The Alliance also observed that without any significant support or investment by the Nigerian state, the Nigerian entertainment industry has for a number of years been the most valuable asset in the projection of a positive international presence and image for Nigeria .

As a first step in a meaningful engagement with the entertainment industry, the Alliance called on President Jonathan to order an immediate review and retooling of some of the federal institutions charged with promoting or protecting creativity in all its forms. In the words of the Alliance, “Some of these institutions have become redundant, ineffective and a huge disappointment to the creative community. For too long, a number of them have had clearly incompetent leaderships that do little else but scheme to preserve themselves in the positions that they do not deserve. Indeed some of these institutions have had no governing boards for several years, denying them of any vision, supervision, control or accountability and leaving them to the whims and caprices of their executive officers”

The Alliance also asked President Jonathan to throw a searchlight towards the creative community for leadership talent which exists in abundance, saying, “We  wish to state explicitly that there exists within the Nigerian creative community persons with the intellect, education, skills and experience to jump start these institutions and give them a new lease of life. Indeed, the creative community boasts of many experts, recognized as such locally and internationally. We request that these persons be deployed immediately for the benefit of Nigeria. It is in the same vain that we state that the creative community has people that can serve meritoriously in the Presidential Advisory Committees, Boards and Governing Councils of federal institutions and even in the Federal Executive Council. We wish to state our opposition to a mindset that suggests that only career politicians can fit into these positions. Put simply, the Nigerian creative community is ready to work for Nigeria”

As stated at the conference the focus of the Alliance will be the articulation and promotion of industry–wide policies, the joint endorsement of properly agreed legislative initiatives, the appropriate positioning of the industry within the nation’s political sphere, the strengthening of the drive against piracy and other forms of copyright infringement, the development and co-ordination of institutional financing schemes for the industry and the more effective management  of deviant elements within the industry.

At the conference it was also stated that one of the critical issues that the Alliance will be addressing is the accessibility of appropriate financing to support the significant creative energy being generated by thousands of Nigerians across the nation. The Alliance echoed its belief that the Nigerian state has a sacred duty to look far and wide and ensure the presence of the means and the environment for the full exploitation of the creative explosion which is visible all over the nation. The Alliance commended the World Bank for its recent support which was termed as ‘a vote of confidence on the Nigerian Entertainment industry’. The Alliance called on the bank to ensure that the rules of engagement are very clear and that whatever funds it provides are managed transparently and professionally. The Alliance also called on other financial institutions, domestic and international, to follow the lead of the World Bank to build capacity in one of the fastest growth areas in Africa’s most populous nation.

The Alliance also warned all Nigerian politicians that it will not be business as usual stating that t the coming election campaign, the Alliance will vigorously mobilize and campaign against any politician who has no well thought out plan for harnessing the tremendous talent which abounds in the Nigerian entertainment industry for the development of the nation and “the employment of the millions of young people who roam the streets with no hope”

While acknowledging the warm relationship that has existed for some time between President Goodluck Jonathan and practitioners in the entertainment industry, it was clearly stated at that the Nigerian Entertainment Industry Alliance will NOT engage in any unmerited praise singing of Dr. Jonathan or anyone else.

In the more than two hour interactive session that was moderated by COSON chairman, Chief Tony Okoroji, several stakeholders spoke about their excitement and the historic nature of the development and pledged their support towards the success of the Alliance. As was declared during the conference, with the arrival of the Nigerian Entertainment Industry Alliance, the Nigerian entertainment industry is finally open for real business.

FOR: THE NIGERIAN ENTERTAINMENT INDUSTRY ALLIANCE

Ikeja, Nigeria – Stakeholders of the Nigerian entertainment industry will storm the five-star Jade Garden Chinese Restaurant in GRA Ikeja on Monday, June 7, 2010 in a historic show of unity and strength. The event will mark the first World Press Conference of the newly formed pan–industry organization, the Nigerian Entertainment Industry Alliance.

The Nigerian Entertainment Industry Alliance has been formed to address those biting issues which cut across the industry and which none of the existing associations can successfully handle on its own. It is indeed an affirmation of the fact that despite the emergence of sundry organizations that seek to address specific sectors of the industry, Nigeria has never had a broad national platform that professionally articulates and promotes industry-wide policies on such issues where there is common interest of entertainment industry stakeholders across the nation. 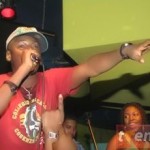