Land Rover has unveiled the world’s first luxury compact SUV convertible. Range Rover Evoque Convertible combines the bold design and refinement of Evoque with comprehensive specification and a sophisticated folding roof to create a no compromise, all-season convertible. As the fifth member of the Range Rover family – and the first ever Land Rover convertible – the highly desirable new model combines traditional Range Rover luxury with a distinctive four-seat design and versatile storage.

The global SUV market is forecast to grow by 20 per cent over the next five years* and Evoque Convertible will play a key role in continuing Range Rover’s 45-year success story, pioneering an all-new SUV sector. The Evoque will be available in Land Rover’s key sub-Sahara Afirca markets in the second half of 2016. 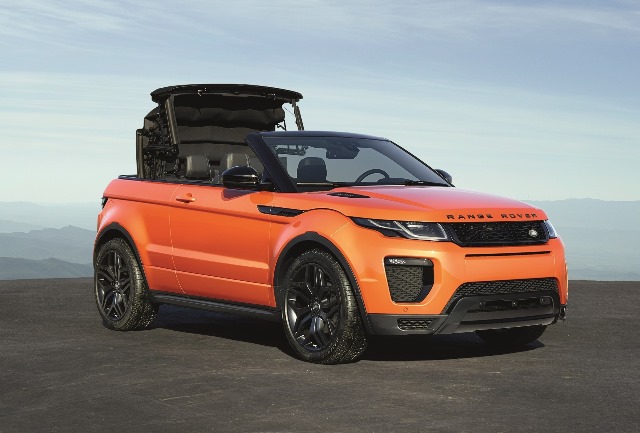 The fully automated roof stows in just 18 seconds, and can be raised in 21 seconds, at speeds up to 48km/h. When closed it provides high standards of refinement with a layer of acoustic insulation ensuring interior comfort on a par with five-door Evoque. In addition, the position of the roof doesn’t affect load space, with a generous 251-litre boot offering unrivalled practicality for a convertible.

The Evoque Convertible features a Roll-Over Protection Device with deployable rollover bars hidden in the rear bodywork. It deploys two aluminium bars within 90 milliseconds in the unlikely event of a rollover situation to create a survival space for occupants. It also features a high-resolution 10.2-inch touchscreen with Jaguar Land Rover’s InControl™ Touch infotainment system. The system allows drivers to control a multitude of vehicle functions, including the entertainment system.

Tosan Aduayi has reported on Motoring since 1994 with trademark columns (Roadrunner, Carliners). He is the Founder and Publisher of Trendy Africa Magazine.