New York City, New York – With the beautiful ambiance overlooking the East River, the United Nations played host for the Republic of Equatorial Guinea forty-fourth Anniversary marking their Independence from Spain. Diplomats from United Nations member states, Observer Status Missions and Representatives of Non-Governmental Agencies were on hand to mark this occasion. 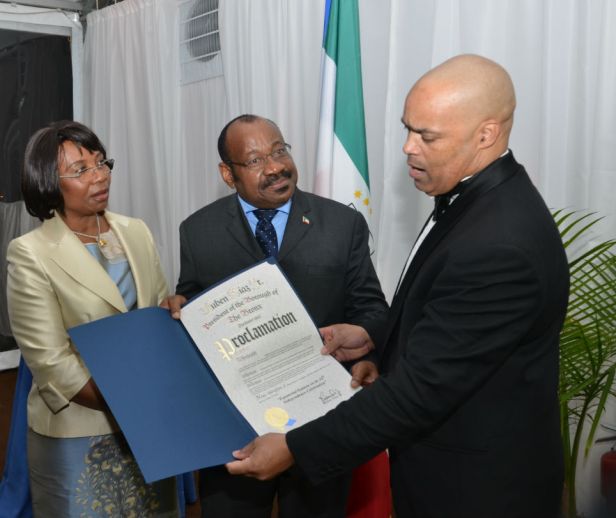 Victor Mooney reads the proclamation to H.E. Anatolio Ndong Mba, Permanent Ambassador to the United Nations for Equatorial Guinea, as his wife looks on.

Borough President’s Markowitz and Diaz took pride in recognizing Equatorial Guineans that call Brooklyn and the Bronx home. His Excellency, President Obiang Nguema Mbasogo was praised for leading the fight against AIDS through preventive education, condom distribution and financing of anti retrovirals for afflicted populations.

As President Obiang Nguema Mbasogo has extended nationality to African-Americans, Mr. Mooney called for a consulate office in New York. “With a consulate in New York, it will help accelerate the Horizon 2020 Plan”, said Mr. Mooney to the Legal Attaché of the Equatorial Guinea Mission. “The train for development in Equatorial Guinea has made a stop in America and I encourage other African-Americans to get on board”, Mooney added.

The Horizon 2020 Plan, set in motion by President Obiang in 2007, has five major goals: Invest in strengthening economic growth; Strengthen the development of structured investments; Promote and strengthen the development of social policy actions; Ensure a transparent social climate; Develop the prospects for better monitoring and evaluation of poverty and living conditions of households.