As the United States and other big economies step up measures to cushion the effects of global economic recession, the World Bank has warned that a full blown socio-political crisis is imminent in Nigeria and other African countries owing to the recession. 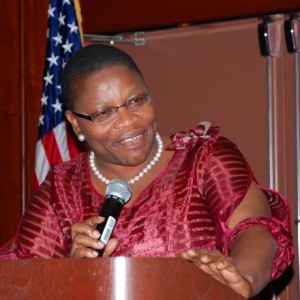 And to avoid such meltdown, she had proposed far-reaching measures that countries must adopt to cushion the effects. Some of the measures, according to her include proper management of public finances, well-managed fiscal stimulus programmes and proper enthronement of market-based principles as a measure for Africa to deal with such economic glut.

African leaders, she said, should endeavour to sensitize their citizens on the challenges ahead and options to solving the economic monster.

“The global economic crisis bears the risk of becoming a full blown political and social crisis. This is a time when African governments must engage their citizens in an open dialogue about the challenges ahead and the difficult options for dealing with them”, she said while adding that citizens will be part of the solutions.

African stock markets, like Uganda‘s, fell by over 40 per cent. Ghana and Kenya had to postpone sovereign bond offerings worth over $800 million, delaying the construction of toll-roads and gas pipelines. For oil exporters, the decline in oil prices meant a potential loss of 15 per cent of GDP in 2009.

According to her, the worsening economic performance will make the actualization of the Millennium Development Goals harder, result in increased infant and child mortality, as well as make primary school completion rates to fall.

In addition, the decline in oil prices, she particularly noted, might result in loss of 15 per cent of the Gross Domestic Product accruing to oil exporting countries in 2009.

Nigeria, the fifth largest oil producing nation, depends solely on crude oil as its main sources of revenue. Though the 2009 Federal Budget is based on $45 benchmark, the authorities have assured that the plunging price of oil in the international market will not affect the budget.

She identified Uganda, Ghana, Kenya and South Africa as some African countries that had started feeling the negative impact of the economic glut.

The U.S. stimulus currently under consideration weighs about 2.9 percent of GDP per year for two years. This is almost certainly short of what will be needed to improve the economy, but even the level of stimulus is already substantially more than what most of major trading partners have put on the table.

The European Union (EU) has announced a coordinated plan for a one-time expenditure of about 1.5 percent of its collective GDP. Some EU countries will top up these EU-wide expenditures, but taken together, the European economies are still lagging far behind the United States.

China is one of the few U.S. trading partners that is rising to the current fiscal challenge. The Chinese will use some of their massive reserves to fund a stimulus equal to almost 7 percent of GDP per year in 2009 and 2010.

During these times, well managed fiscal stimulus programs, financed with external resources, could avoid a sharp fall in growth in African countries while investments in safety nets and infrastructure spending, notably in maintenance will cushion the fall and position Africa to take advantage of the rebound of the global economy when it occurs.

“This is the thinking behind the recent proposal of Mr. Zoellick, President of the World Bank Group, that each developed country should pledge 0.7 per cent of its stimulus package to a Vulnerability Fund to help developing countries weather the crisis.

“Market-based principles enabled 64 per cent of Africa‘s population to experience economic growth of between 5.9 and 8.1per cent per year during 1997-2007. The revolution in the telecoms sector in many African countries is just one example of how market principles have changed lives of citizens for the better.

“Foreign investors will return after the crisis has ebbed. But they will be cautious and invest first in those countries that kept to the reforms they had initiated, demonstrating a willingness to strengthen governance, embrace the rule of law, and modernize local capital markets.