Huawei has unveiled what it says is the world’s thinnest smartphone. The Android-based Ascend P6 is 6.18mm (0.24in) thick and is also unusual in that it has a 5 megapixel front camera for “high quality” self-portraits.

The Chinese firm has said it expects the handset to do “miracles” for its brand. Huawei says it designed one of the slimmest and narrowest circuit boards in the industry to squeeze the electronics into the new handset. 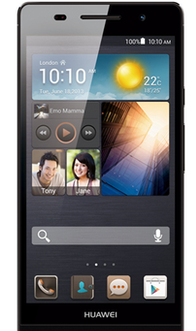 The device has a 4.7in screen making it comparable to the HTC One but is more than 3mm (0.1in) thinner. It is also slightly slimmer than both the iPhone 5 and the Alcatel One Idol Ultra – which previously claimed to be the world’s thinnest – but at 120g (0.26lb) weighs a little more than both.

Huawei is already a well-known brand in China where it grew to become the country’s biggest maker of telecoms equipment after being founded in 1987.

Previous Article ‘Gem of the Rainforest’ reveals class act in African filmmaking
Share This
Next Article Is “World War Z” Worth the Hype?