An annual evaluation of performance indicators, jointly produced by the African Development Bank (ADB); the OECD Development Centre and the United Nations Economic Commission for Africa (UNECA) indicates that about 133 million African youths are illiterate. Widespread illiteracy is inimical to development, because illiteracy is the harbinger of a plethora of socio economic problems. For any nation, a high illiteracy rate inherently translates to lower health standards, lower mortality rates and lower productivity, and the much broader problems of drug abuse, high unemployment and high crime rates. Because a nation with large numbers of illiterate citizenry is a breeding ground for criminality, the economic cost of running penal institutions become Because of the stark reality of these social and economic problems that Africa is wallowing in, TROPICAL GEM STUDIOS, a US movie production company, and TFP Studios, a Nigerian film production company, have come together to collaborate in the production of “Blood in the Lagoon” a movie that is designed to help combat these societal issues. Nollywood megastar, Omotola, Teco Benson and a host of others will be hosting the premiere of Nollywood’s most anticipated movie for 2014, “Blood in the Lagoon 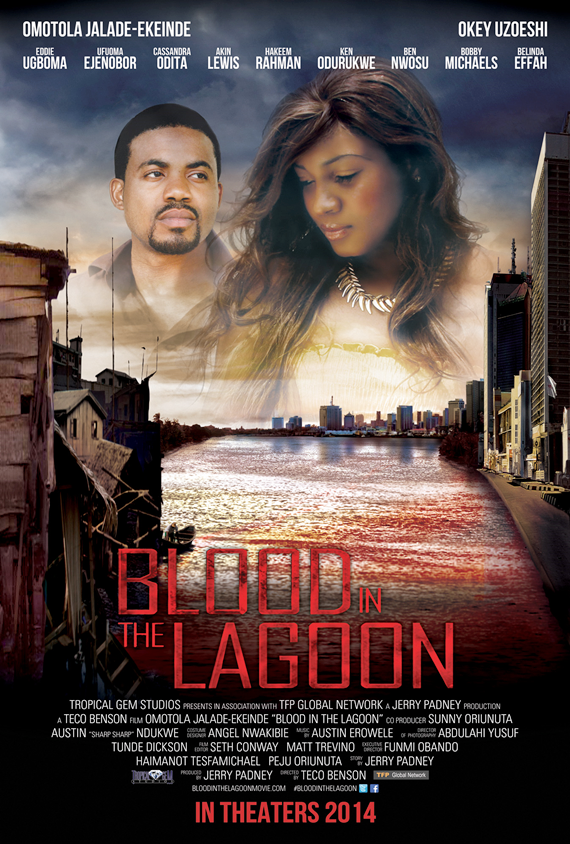 ABOUT THE MOVIE: Born into abject poverty and thrust deep into to the drudgery fate has dealt him, our protagonist ekes out a living in the treacherous murky waters of the waste deluged Lagos Lagoon. Just like thousands more kids in the many slums of Nigeria, his life story is already written and sealed by fate, even before he came into the world. And this is not of his making. The chances of getting any education and maybe clawing his way out of the situation is zero to unlikely, at best.

But after the murder of his brother, our protagonist sets out to, not allow his brothers dream die. “Blood in the Lagoon” is a drama that is emotionally charged, thought provoking and one that will cause the viewer’s inner being to question how man deals with his fellow man. It will change the viewer’s perspective on the society he lives in. It also has a subtle tinge of comedy and good clean romance to balance out the ingredients of a good cinematic experience.