Nigerian President Muhammadu Buhari will meet with President Barack Obama in Washington, where they are set to discuss the fight against terrorism and boost damaged bilateral relations. Top of the agenda “will be measures to strengthen and intensify bilateral and international cooperation against terrorism in Nigeria and West Africa”, said a statement from the Nigerian presidency. 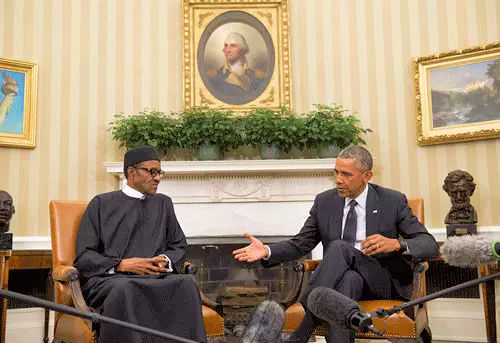 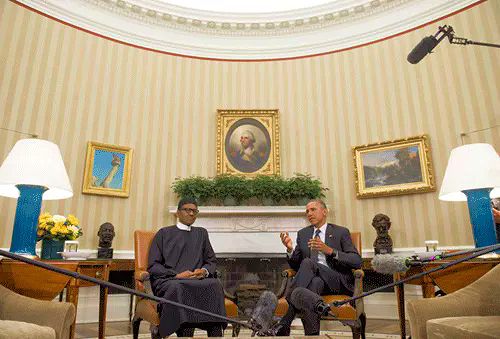 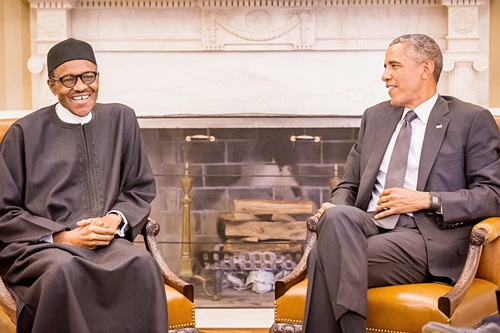 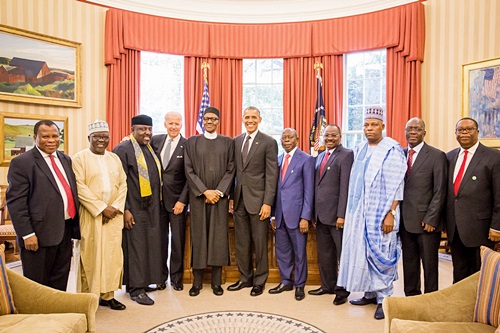 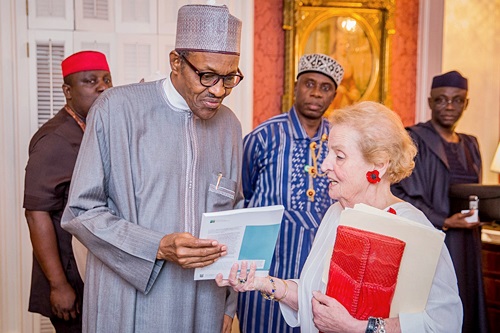 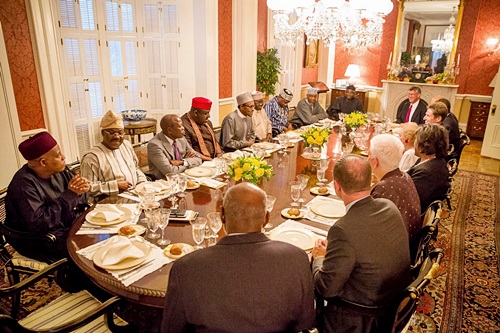 The West African nation decided to halt a US training programme for an army battalion which would have developed into a unit to take on the militants. The US State Department reacted swiftly, assuring that it would do what was needed to assist Nigeria. 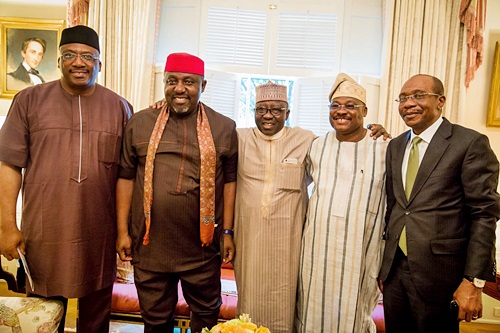 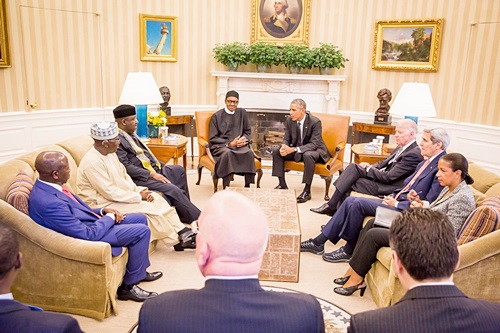 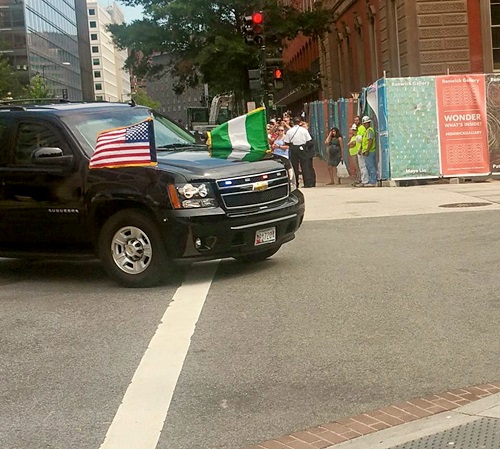 US imports from Nigeria, mostly crude oil and other petroleum products, rose from more than 24 billion dollars in 2005 to over 38 billion in 2008, but dropped sharply to less than four billion last year owing to America’s shale energy revolution.

PRESIDENT BUHARI AT THE UNITED STATES INSTITUTE OF PEACE

PRESIDENT OBAMA:  Well, it’s a great pleasure to welcome President Buhari and his delegation here to the Oval Office for his first visit since the historic election that took place.  Nigeria is obviously one of the important countries in the world and one of the most important countries in the African continent.  Recently, we saw an election in which a peaceful transition to a new government took place.  And it was an affirmation of Nigeria’s commitment to democracy, a recognition that although Nigeria is a big country and a diverse country with many different parts, nevertheless the people of Nigeria understand that only through a peaceful political process can change take place.

On both these issues, we’re looking forward to hearing more about his plans and how the United States can partner with Nigeria so that Nigeria ends up being an anchor not only of prosperity and stability in the eastern part of the continent, but can also be an outstanding role model for developing countries around the world.

And we very much look forward to talking about security issues, how we can cooperate on counterterrorism.  We’re looking forward to discussing how we can be helpful in addressing some of the corruption issues that have held Nigeria back, and unleashing the incredible talent of the Nigerian people.  We all recognize that some of the best businesspeople in the world are from Nigeria, and they thrive as they travel to other countries, but we want to make sure that they’re also helping folks thrive in Nigeria.

We’re also going to have an opportunity to talk about some of the other areas where Nigeria has taken leadership — in public health issues, fighting tragedies like Ebola.  Nigeria has an outstanding track record working with us to eradicate polio, and that gives us a framework and a template to continue to work on public health issues throughout the western part of Africa, as well as throughout the subcontinent.

We’ll have a chance to talk about issues of climate change, electrification.  As many of you know, Power Africa is one of our top priorities, making sure that we’re electrifying the continent so that it can grow faster and more people have access to the power that they need.

So we’ve got a busy agenda, but I want to emphasize how much I appreciate President Buhari’s work so far.  I’m looking forward to seeing him put together his team so that we can do everything that we can to help him succeed and help the people of Nigeria succeed.  Because if they’re successful and doing well, that will have a ripple effect not only in West Africa, but throughout the world.

So thank you very much.

PRESIDENT BUHARI:  Nigeria will remain ever grateful to President Obama and the United States for making Nigeria to consolidate its gains on a democratic system.  The visit of the Secretary of State, when he visited Nigeria to see the President and the whole government of Nigeria, see the Chairman of Independent National Electoral Commission for Nigeria, and saw the operation was very clear and a positive trend that saw us through for this credible election we had.

And the maintenance of pressure by the United States, mainly, and Europe, to make sure that the elections were free, fair and credible led us to where we are now.  It would have been almost impossible if the United States did not maintain the pressure on the former Nigerian government, but they would not accept anything less constitutional as far as the processes of the election are concerned.  We will ever remain grateful to you because there are fundamental objectives that are identify all of Nigeria’s people’s Congress — security, economy, employment especially of youth, and then fighting corruption.

We are extremely happy that the United States had made it absolutely clear before the election that they are prepared to help Nigeria in this aspect.  And this is why I am here, and I am very grateful for the invitation Mr. President extended to me.

Thank you very much, Mr. President.

PRESIDENT OBAMA:  Thank you so much.

Question: Mr. President, the Security Council approved the deal.  Will that help you in Congress?

PRESIDENT OBAMA:  I think it will send a clear message that the overwhelming number of countries who not only participated in the deal, the P5+1, but who have observed what’s happened, recognize that this is by far our strongest approach to ensuring that Iran does not get a nuclear weapon.  There is broad international consensus around this issue — not just among the international community, but also among experts in nuclear proliferation.  And my working assumption is that Congress will pay attention to the broad-based consensus.

SECRETARY KERRY: Good morning, everybody. I am very honored to welcome somebody who’s become a friend, the president of Nigeria, President Buhari. I first met him when I went over there before the elections, and we had occasion to talk about the importance of the election process. It was in the middle of the campaign. And then I had the pleasure of going back for his inauguration, which was very festive and represented the first transfer peacefully of power as the result of an election, and it was a very, very important moment.

Nigeria is an extraordinarily important country, and we have very, very important interests together. We have pledged with the President’s meeting yesterday to work very closely on economic development, on the economy, on counterterrorism, on regional issues, but very importantly also, to join together in an effort to do a better job of taking on Boko Haram. The president is deeply committed to this endeavor. He has a military background. He has himself been in combat. He has led the armed forces of his country and he knows what this is going to take. So we have a ready and willing partner, and we look forward to developing our counterterrorism and our counter-Boko Haram plans even as we also work on energy development, on education, health, and other issues within the country.

So we’re delighted to welcome the president here to Washington. He’s brought a very significant delegation with a number of governors. That’s very important to the ability to put in reforms, and I might mention the president is deeply committed to tackling the problem of corruption, which has prevented the country from doing many of the developmental and other initiatives that are on the table.

So Mr. President, we welcome you. We’re really delighted to have you here. Thank you very much.

PRESIDENT BUHARI: Thank you very much, (inaudible). I’m very pleased to get this opportunity to thank the Secretary of State because his visit to Nigeria, which he’s just referred to, since his visit seemed like a friend to Nigeria. As the United States’ message sent to the previous administration was clean and clear that the United States would not accept anything extraconstitutional, that prepared the minds of Nigerians to back us and to arrive where we are today. Nigeria will remain very grateful to the United States, to the President, and to the Secretary of State. He saw the president then, he saw the chairman of Independent National Electoral Commission, and he saw the opposition. And by the day, the United States maintained pressure on the government, the law enforcement agencies, and the election officials to make sure that the election was free and fair. We thank God, we thank the United States, we thank technology for the introduction of a permanent voter’s card and reader cards made so much difference from previous elections. I thank you very much, Secretary. Thank you very much, ladies and gentlemen of the press.