Davido has been named winner of the Best Male West Africa Category at the just held 2018 edition of the African Muzik Magazine Awards – AFRIMMA awards which held at the House of Blues in Dallas, Texas USA. Several other artists and promoters were recognized for their industry imprint.

Davido of the 30 billion gang fame, was awarded the best in the category for male artists in West Africa, making it the third time he would be picking up this award in consecutive years.

Davido successfully advanced over Nigerian contenders including Wizkid, Tekno, Kiss Daniel and Mr Eazi alongside African colleagues Sarkodie, J Hus, Stonebwoy, Toofan and Sidibe Diabate to emerge winner. His win further validates relentless efforts in pushing boundaries to attain revered status not only for himself but also for patriots actively involved in the Africa to the World movement. 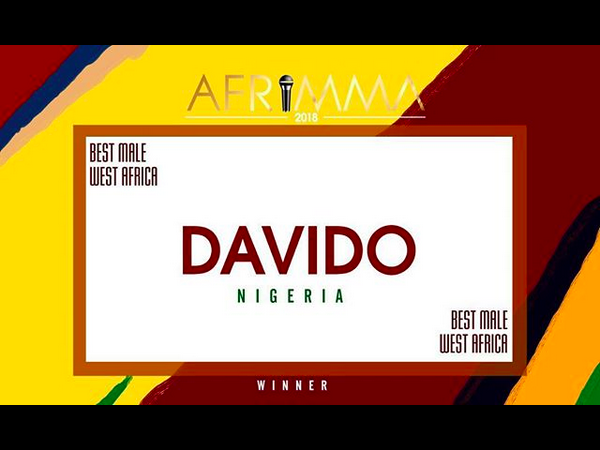 Davido who was recently announced on the platform of the MTV EMA 2018 for his nomination as the Best African Act will be looking to replicate his victory feat at the next award stop in Washington DC, USA for the Nigeria Entertainment Awards. Voting links are now open and available online and on social media.

Artist of the Year

AFRIMMA Video of the Year

Music Producer of The Year

Song of the Year