BEVERLY HILLS – Since bursting onto the music scene in 2001 with her distinctive blend of soul, hip-hop, jazz and classical music, Alicia Keys has built an unparalleled repertoire of hits and accomplishments with over 30 million albums sold worldwide and at the 22nd annual ASCAP awards she received their highest accolade – a Golden Note Award. 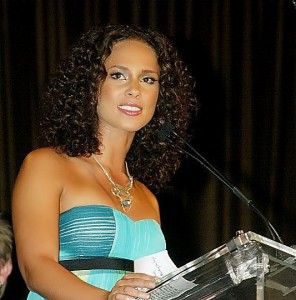 An award presented to songwriters, composers and artists who have achieved extraordinary career milestones, this event was held at the prestigious Beverly Hilton Hotel in Beverly Hills. Among those in attendance were Wyclef, Ashford and Simpson, Kelly Price, Neyo, Debra Lee, rapper Yung Berg, producers SupaSTAAR and Shondrae “Bangladesh” Crawford, Tila Tequila and Melody Thornton from the Pussy Cat Dolls who wore a silver glove in tribute to Michael Jackson.

A highlight of the evening included a musical tribute to Keys performed by 11-year-old musician Gabby Wilson.  Music legend William “Smokey” Robinson, one of the most significant and enduring songwriters and performers to have emerged from the early 1960s Motown explosion was also honored with the Rhythm & Soul Heritage Award, which is given to ASCAP members who have had a major impact on the legacy of Rhythm and Soul.

Established in 1914, the American Society of Composers, Authors and Publishers (ASCAP) is the first and leading U.S. Performing Rights Organization (PRO) representing the world’s largest repertory totaling over 8.5 million copyrighted musical works of every style and genre.