The second in the series of the Ignite Africa Readers R Leaders Destiny walk held on Saturday 19th of September, 2015 at the Teslim Balogun Stadium, Surulere, Lagos. The annual walk focuses on creating awareness about the importance and positive attributes of a healthy reading culture among youths in Nigeria. 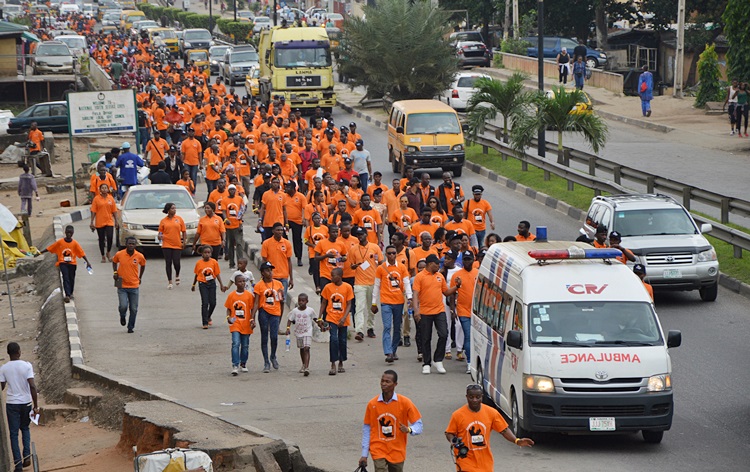 Stemming from the dismal failure rates recorded in examination results in recent years, Ignite Africa, a nongovernmental organization founded in 2010 by Kolawole Oyeyemi conceived the idea to check the negative trend and build a positive and vibrant future for youths by exposing them to the importance of reading. 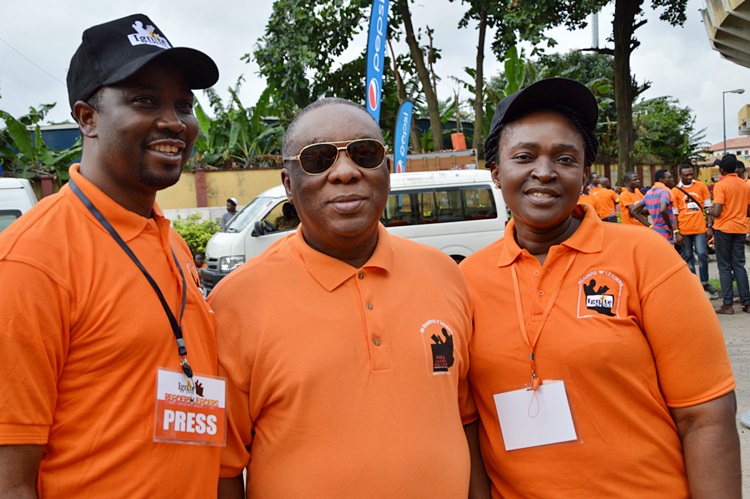 The presentation of an iPad Mini, a galaxy tab and an iPhone 6 to lucky winners of a raffle draw, comedy skits, musical entertainment and refreshments all formed aspects of a fun filled and successful event. Organizers also gave out Free T-shirts and face caps to participants.

Ignite Africa is a nongovernmental organization founded in 2010 by Kolawole Oyeyemi. A huge passion for youths due to their vulnerability and their tendency to channel their boundless energies into vices that have the potentials to destroy their future, the future of our nation and the future of Africa is the motivation behind its foundation. Ignite Africa focuses on teenagers and young adults but pays special attention to teenagers in their peculiar age of sudden discoveries. This formative age is critical to molding great leaders who will take Africa into the next millennium as an informed and prosperous continent.

Kolawole Oyeyemi is a marketing management expert, a strategist, a motivational speaker, and an industry sector leader in Nigeria. He is a marketing management professional with over 23 years wealth of management, marketing, and marketing communications experience; with a track record of successful marketing management practice across industries from a leading multinational FMCG company to telecommunications. After a successful marketing career in the manufacturing and marketing sector, he became and still remains a part of the marketing team that has built the biggest brand born out of Africa. He holds two leading industry roles as the President of ADVAN (Advertisers Association of Nigeria), and as Chairman of the umbrella body of ‘Heads of All Advertising Sectorial Groups’ made up of all marketing organizations and marketing services supplier groups.  He serves as a council member on APCON; Nigeria’s advertising practice control body.

Tosan Aduayi is the founder of Trendy Africa Magazine/Trendy Communications LLC and has been an active journalist since 1994. Photos by Ajayi Oyebo

THE MAKING OF A GREAT NATION – A Tribute to Kola Oyeyemi

As a thought leader and one with particular interest in nation building, I have come to understand that a free society can neither be prosperous or develop sustainably without the requisite social and national cultures as well as certain skills. Nations do not happen upon development and prosperity serendipitously. Every society that continues to grow possesses certain qualities and attitudes that ensure its upward trajectory.

In the end, it’s not the material wealth, natural resources or population of a nation that determines the progress and standard of living of that nation. Our nation Nigeria provides sufficient empirical evidence to prove this point as do many other African nations stricken with war, poverty and backwardness. It’s what I’ll like to refer to as the soul of that society that determines their progress or retardation.

The soul of a people is shaped by their history and the values they’ve embraced as a people over time. Nations that do well embrace values such as hard work, freedom to dream and pursue one’s own dreams, awareness that the prosperity of the whole is the prosperity of the individual hence doing nothing to sabotage it, knowing that leaving a legacy for coming generations is not just a privilege but a responsibility, respect of the dignity of the human person, etc. Failing nations on the other hand have the gangrenous attitudes of selfishness; entitlement mentality; lack of vision, passion and drive eating away at their soul.

A nation is as defined as it’s leaders as by it is by the citizenry. For after all, “Toute nation a lie gouvernement qu’elle mérite (Every country has the government it deserves)” – Joseph de Maistre. In a free society leaders come from among the people and the people make their own leaders. So a leadership problem, like many will like to allude to, is really a cultural problem. It is a societal problem that originates from a defective value system.

To correct such a deep rooted problem, a quick fix will never suffice. An enlightened few must arise; these are the true leaders of any society not elected office holders. These enlightened few must sow seeds that are potent enough to heal the soul of the society over time. One of such leaders that I have come across recently and have had the honour of meeting is Mr. Kola Oyeyemi. He is an embodiment of the kind of values necessary to change the future. Not only is he enlightened, he is also committed to leaving a legacy that will be of great consequence in the sands of time. He has, through the ethics of hard work, vision and perseverance, built an enviable career in his chosen field of marketing. Not only has he excelled, he has also written the first marketing management book in Africa and with Africa as it’s focus. The book, Kill or Get Killed, 2014 by Kola Oyeyemi has garnered many praises from both the local and international communities.

Of even greater import and interest to me is the Ignite Africa Leadership Foundation that Kola Oyeyemi founded. Through this foundation, the seeds of greatness and leadership are being sown into the young and impressionable members of society, our future leaders. Having himself gotten the edge in life through the voracious reading of books, through the foundation, he is providing books to these youngsters as well as adults through the instrumentality of the Ignite Bookclubs and the recently launched Ignite Africa Library. During the 2015 Destiny Walk event(where the online portal of the library was launched), an annual event geared towards reviving the reading culture and getting the government and private sector to participate in the all important activity of sowing seeds for the future of the nation through books and policies that make for a good reading culture and hence an intellectually upward society and consequently a growing and prosperous nation, stated clearly that he is not a politician and does not intend to run for a political office. He is only genuinely interested in contributing to the growth and development of the nation and securing her future.

What shall we say then? With men and women like Mr Kola Oyeyemi, people who will make sacrifices in order to sow seeds that will guarantee us a happier future, our hope for a greater Nigeria remains alive and well. One of such women who has also sacrificed immensely towards this cause is one who left her job in the U.S. to come and run the day to day operations of the activities of the foundation. She has spent her time, her money, her energy and emotions to see that she makes a difference and on top of that, she loathes publicity and would rather remain anonymous. All she wants is to contribute her quota. Many other great people, young people also work with those two to take this vision farther and further. With people like this who will not relent in sowing the right seeds, one at a time, who will not fail to do what they can to contribute to the health and progress of this nation, we are assured of a better future, a greater nation. One in which our leaders are leaders indeed, our schools are state-of-the-art, our libraries are filled with relevant and recent books, and most importantly the soul of the nation is healthy capable of using our God given resources to create prosperity.