Arlington, TX – The future of the African Head wrap (gele) becoming an International couture contraption is imminent as revealed at the just concluded La Femme Gele Extraordinaire event. The 2nd annual LGE also featured the presentation of two round trip tickets to Lagos courtesy of Arik airlines to  the lucky winner of a raffle draw amongst several other prizes won at the event. 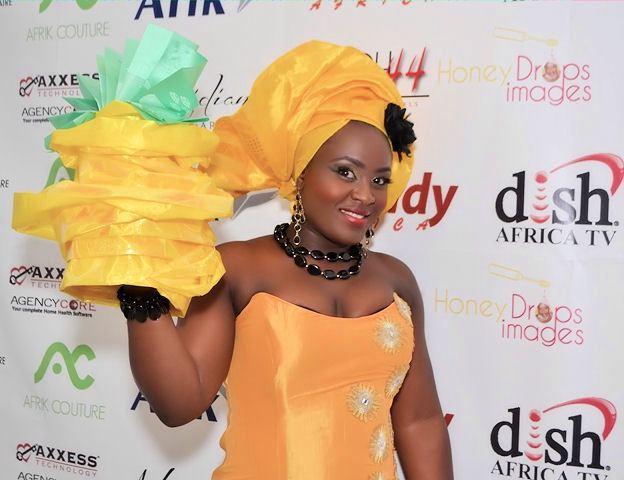 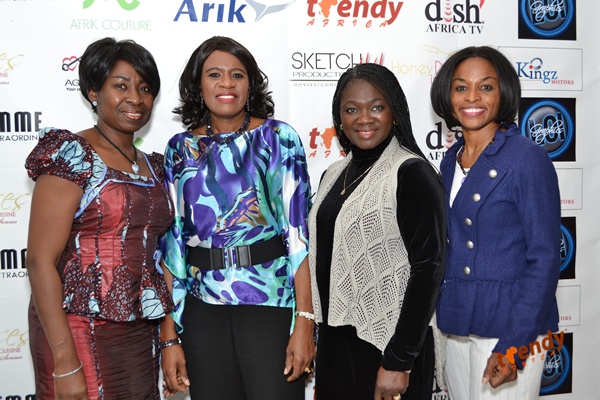 The exciting and fast paced event which held at the luxurious Meridian Gardens in Arlington, featured  a Fashion Show presentation by Afrik Couture who modelled 20 outfits while talented Liberian pop star Jodi performed his hit songs live and wowed the audience with his unique style. The competing stylists; Mary Onime-SIGnachore fashions and Oyin Adu-Honeydrop Images; the winner (2nd time) gave professional presentation’s of their individual skills during the 3 stage competition. 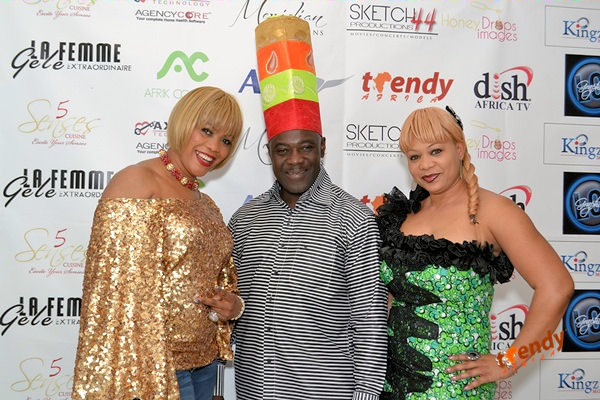 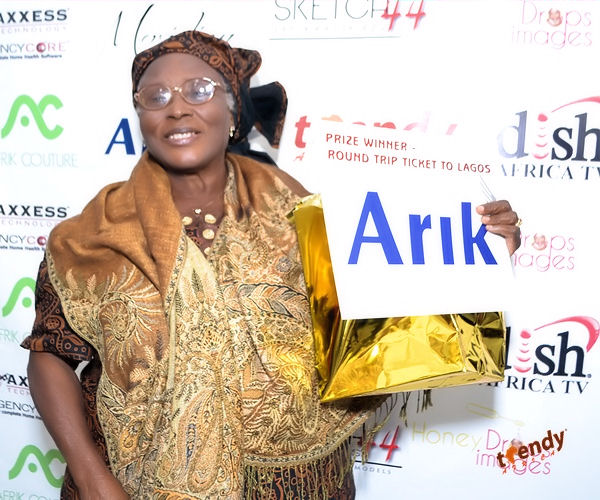 While enjoying the plush ambience of the venue, guest were consistently entertained with great palatable cuisine from the stables of 5 Senses and Mega catering who both gave good accounts of themselves. Guest comedians Alabash and Don Manuel held sway during the brief intervals while DJ Nana B ensured pure excitement throughout the evening.

LGE is conceptualized to create a unique conduit for projecting the rich cultural values of Africa and also to create healthy avenue for the display of skills, products and services. In today’s African Fashion World, the head wrap is seen as a glorious accessory sculptured to compliment various attires of choice.

LGE benefits SAD- Speak up Against Domestic Violence; an awareness campaign. To this end, Miss Nkiruka Ogujiofor narrated a personal experience and enjoined all those in abusive relationships to; “Get Out…as its better to be safe than be sorry”. Nkiruka added that an aspect of the healing process is to “speak up”.

For further inquiries or to share an experience, write to: SAD, P.O. BOX 393, MANSFIELD, TEXAS 76063 or email: info@trendyafrica.com

Keynote address by Gele  TEA, UK – Mrs. Yinka Sunmonu: It is the couture designer Adebayo Jones who told me about this event when I told him that I would be in Dallas. “This could be good”, I said, “but what do you know about Tosan Aduayi?” Adebayo and another couture designer friend Yemi Osunkoya of Kosibah replied that he has heart. That’s powerful. To me, heart means life, love, passion and compassion. Heart gives you the commitment to right wrongs, fight causes, make people aware, and make life better.

So,  it is with great pleasure that I’m here to celebrate La Femme Gele Extraordinaire  with you and to talk briefly about Gele Tea, which also pays homage to the Gele and serves to raise awareness of Alzheimer’s especially in our community. Gele Tea is named in honour of a relative living with the disease who loves the Gele and fashion. Alzheimer’s is an illness some say we do not want to talk about in the community but, if this is true, then something magical happened with Gele Tea.

Two of our most iconic and multi award winning designers (Adebayo Jones and Yemi Osunkoya of Kosibah) came on board. Adebayo Jones so inspired and went on to create the Africana Jones collection, which previewed at the show. Couturier Clariscia Gill of Mayfair created a fairy tale dress for auction befitting her status as the “fairy godmother” of couture,  Lyze Bamigbola, a milliner by royal appointment, designed a hat while luxury textile designer Banke Kuku, who has designed prints for Duro Olowu, produced fabrics for the occasion.

People came and they listened to the professionals – Morejoy Saineti and Maggie Owolade both award winners in this area. Alzheimer’s is defined by Alzheimer’s UK as “a set of symptoms which includes loss of memory, mood changes and problems with communication and meaning.” Imagine being locked in memories of 1961 when it is 2011 or you ask your partner, child or dear friend “Who are you?” this can be Alzheimer’s.

A recent finding from Alzheimer’s disease International shows that Worldwide, there are 35.6m people with dementia and by 2050, the number will rise to over 115million. I mentioned earlier that magic happened with Gele Tea…Ben TV covered the event and helped to raise awareness among thousands of viewers, it became the inspiration for other organizations who arranged tea parties and fundraisers and by providence, it brought me here as a guest.

The slogan for Gele tea is “it’s the memory…you remember for me”. Our role is to remember our loved ones or friends and create a new life where they can feel that love. I am here to ask you to be aware of this illness, find out about it if you don’t know, support those you know who are affected by it and their families and to be aware. Most of all, I ask you to have heart and realize the power you have in you to effect change. I wish La Femme Gele Extravaganza every success and that I credit you for standing up against domestic violence, which can blight lives.

Thank you for your hospitality.

ADEBAYO JONES: Tosan Aduayi and team Trendy Africa; I salute you for organising an event that not only celebrates our heritage, through the Gele, but keeps our culture alive. May your efforts continue to reap success and may La Femme Gele Extravaganza grow to become one of the social events of the year. My thoughts are with you and I hope to grace an LGE occasion some time soon. Trendy Africans, enjoy yourselves tonight. 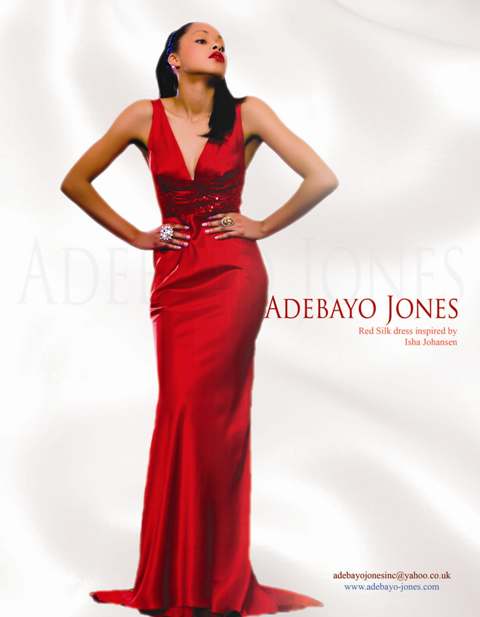 YEMI OSUNKOYA: “It is with great pleasure and pride that I congratulate Tosan Aduayi and the Trendy Africa team for arranging this spectacular occasion. I regret I’m not able to be here personally, but please be aware my thoughts will be very much with you. Tosan has had a vision for many years, but unlike many others, has been very fortunate to see it through to such an excellent degree and I salute him for that. I wish the event great success and hope to be able to attend next year or some other time in the future. Thank you very much. 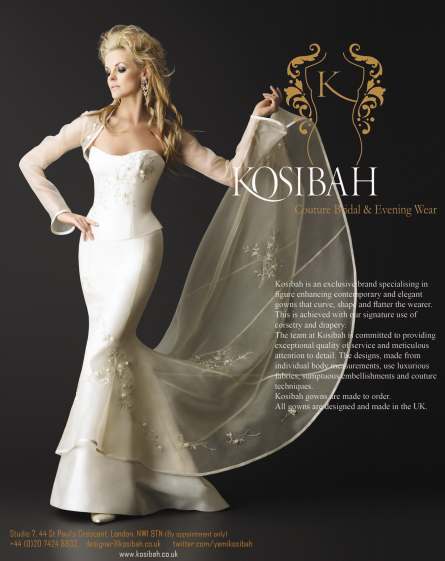