Carlos Slim Helú has been named the first non-American in 16 years to become the globe’s richest man. The 70-year-old Mexican’s path to an estimated $53.5 billion (£35.8 billion) fortune is resolutely “Old School”, too – buy companies cheap, turn them around and then ruthlessly drive the competition out of the market.

Slim was named by Forbes magazine as the world’s richest person, ousting Bill Gates. Whether in making a phone call, buying a soft drink or coffee, smoking a cigarette, going out in the car or using a cash machine, it is unlikely the average Mexican can avoid patronizing a Slim-owned business and contributing to the almost $30 million he is estimated to earn each day. 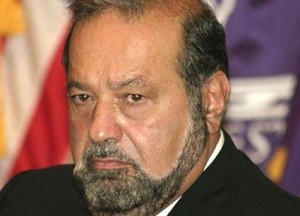 Through a sprawling empire of more than 200 companies – he has said he has “lost count” exactly how many – which encompass banking, retail, airlines, mining, printing, construction, restaurants and particularly telecoms, he has developed an economic stranglehold on his native country so vice-like that a new word – Slimlandia – had to be created to describe it.

A modest lifestyle is often mistaken for a disregard for money, when it is in fact a healthy regard for conserving the stuff. Although he claims not to care about rich lists, the king of Slimlandia, who likes to wear a cheap plastic watch that doubles as a calculator, is certainly parsimonious.

The son of a poor Lebanese immigrant, he still keeps the ledgers in which his father made him note down his management of his weekly five pesos pocket money. (He still prefers paper and pen, does not use a computer and insists that advisers confine their briefings to one sheet of paper.)

Slim lives a life far removed from the conspicuous consumption of, say, Russian oligarchs. One of the latter might have indulged Slim’s passion for baseball by buying his favourite team, the New York Yankees. Slim; however, is content to remain a fan, albeit one with a computer-like memory for player statistics. Other indulgences are also understated – he likes to stay up late reading history books, particularly about Genghis Khan. His Mexico City home has just six bedrooms and a small swimming pool, even if it is filled with art by Renoir, Van Gogh, Rivera and his personal favorite, Rodin

his three grown-up sons are increasingly taking a prominent role in the family empire, especially after Slim Senior had heart surgery 13 years ago. Slim – whose wife, Soumaya, died from kidney disease in 1999 – meets them, along with his two sons-in-law, every Monday for a simple home-cooked meal at his house where they discuss business. In keeping with his homespun image, the boys were never packed off like their peers to expensive foreign business schools but went to Mexican colleges and then learnt on the job.

Slim instead attributes much of his achievement to his father, Julian, who was 14 when he emigrated from the Lebanon to avoid military service in the Ottoman Empire and built a fortune from a general store during the 1910 Mexican Revolution. Jean Paul Getty was also an early role model after the younger Slim read an article in Playboy about Getty’s business success. By 11, he was investing in government saving bonds; by 15, he had bought a small shareholding in Mexico’s biggest bank.

He was worth $40 million by the time he was 26 but really struck gold during Mexico’s 1982 recession when he was able to hoover up businesses at knock-down prices. In 1990, he received his second big break when Mexico privatised its national telecoms company, Telmex, and Slim beat off the American giant Southwestern Bell and France Telecom to snatch it up. Telmex now operates around 90 per cent of Mexico’s telephone lines while its mobile phone network is the biggest in Latin America.

He has a growing list of American interests, including an 18 per cent stake in the department store group Saks and a one per cent share of the Citigroup bank.

Cynics might say he dropped any aversion to charity when, in January last year, he revealed plans to inject $250 million into the New York Times newspaper – upping his previous 6.4 per cent stake in the liberal publisher. If nothing else, his Times stakes pulled him out of the shadows and enhanced his public profile.